Early, in my acting career, an agent called me into her small office on Sunset Boulevard after witnessing “brilliance” (me in a showcase).  She thought I had “something”.


She was an elderly chain-smoking woman with a big desk and a young Latino boyfriend, and or slash husband, who was coming in after a bike ride but not breaking a sweat.  They kissed after she expelled a lengthy plum of cigarette smoke. He hoisted the bike on his shoulders and walked upstairs.  He stuck his left thumb in the back-side of his biking shorts and started pulling them down before he got to the top of the stairs. (Multi-tasking I supposed.)

That scene behind her and in between long puffs on her cigarette, she spoke to me with a gravelly voice. “I think I can do something for you, Joe.”  And when she said “Joe” it came out as an overly long and raspy “Jooooooooooe.”

Suddenly she pulled out a thick book of clippings of her days as a model slash actress.


“Joe, I was beautiful once.  Look at me, Joe.  Look at me!”  With cigarette in hand she pointed to her pictures and was dropping ashes on them.  Taking a deep breath she coughed or blew the ashes off first and then wiped the remaining bits of ash into the photographs.  It was a messy scene and one that had not escaped my perception for use in later endeavors.


“Yes, these are beautiful pictures.” I said.  But in the back of my mind I thought, “I thought we were here to talk about my career?”


Not quite “old Hollywood stories” but just one that sticks in my memory about this movie-making town.


The Macha Theatre in West Hollywood used to be The Globe Theatre.  On the outside little has changed.  But the interior is beautiful and inviting. The lounge and bar are delightful, the patrons come expecting to have a good time and they do.


Garbo’s Cuban Lover written by Odalys Nanin and directed by Laura Butler and Odalys Nanin at the Macha Theatre through October 30th, is a very charming show, wonderful in execution, and a delightful experience.


If one gets excited by the Hollywood of old, this production will definitely light the fire that will send you running out of the theatre in flames (in a manner of speaking) and telling everyone you know about this production.  Where else will you find Isadora Duncan (Erin Holt), Greta Garbo (Lina Hall), Irving Thalberg, (John Nagle), and Marlene Dietrich (Vera Petrecheuka) all in one fabulous show?


Briefly, as the play begins, Mercedes de Acosta (Odalys Nanin) lies on a bed in pain, her arm in a sling and her head bandaged. Beside her is a beautiful young, soft and nubile woman that dances around her as though she was remembering those glorious images of old Hollywood and the women who danced out of her life.   The Dancer dances with little on that provides pleasure to a highly active imagination (most of us).


Mercedes de Acosta tells a story to a young Isadora Duncan. But there is something wrong because Isadora died in 1927. And there is something in her character makeup that makes one believe she is “not all there”.  And you can believe that the images she congers up is true, or not.   Still, Ms. de Acosta takes Isadora back in time to let her in on the secret of how she managed these affairs with the most beautiful women of her time.


Salka Viertel (Lisa Merkin) has invited a number of friends for tea to her home in Santa Monica.  Ms. Mercedes de Acosta’s arrival has cause a bit of a stir.  It seems her reputation has preceded her as the guests (Ginger Pennington and Vera Petrechenka) speak in hushed and boisterous tones about her sexual proclivities.  Talk does not bother de Acosta as she welcomes the comments about herself and of her reputation.


It matters little because de Acosta wants to meet Greta Garbo and visa versa.  De Acosta enlists Viertel to make that happen.  Viertel, the writer of Queen Christina, tells de Acosta that she is very protective of her good friend, Greta.


And as the moments unfold Greta Garbo (Lina Hall) makes a grand appearance and is simply uninspired by the people surrounding her including de Acosta.  She stands silently waiting for those who wish to make her acquaintance come to her and she also plays hard to get which doesn’t make it easy for the advances of de Acosta who wants to know all about her work.


No one making films can be happy. – Greta Garbo

Nevertheless, Greta invites de Acosta to her place to talk about the significant things in her life.

This tree is my only joy in Hollywood. – Greta Garbo

So things are not going exactly as planned for de Acosta.  In fact Garbo tells her not to come into the house, and to sit silently outside, on a bench, and look at her tree.


De Acosta waits Garbo out and eventually they form a relationship and go on a vacation together. And as Greta is rowing the boat to a secluded island in a lake, she hears on owl and immediately turns the boat back to shore.

This is a bad omen. – Greta


“No, I think it’s an owl.” de Acosta says and implores her softly, with hands on her shoulders, to turn the boat around toward the island.  Garbo, acquiesce.


With the relationship established, de Acosta is called into the office of Irving Thalberg to write movies for Garbo.  But later things don’t go well for de Acosta when she writes Dorian Gray as a masculine material for an actress that is considered a feminine beauty and a bankable star.


Not only that but the papers have reported them walking hand in hand down Hollywood Streets and Thalberg doesn’t approve.  He lectures de Acosta as she is having sex with Garbo.  All the while de Acosta takes copious mental notes.


De Acosta finds out, Garbo walks out and the relationship is irrevocably destroyed.


With Garbo out of the way Marlene Dietrich (Vera Petrechenka) comes by for a visit and they have a relationship.  Still, de Acosta’s heart is with Garbo.


This show is a lot of fun with some very fine performances by all involved.  Still there is one scene I would like to clean up and I’ll get to that later.


Each actor has a magnificent entrance as each star comes in wearing the perfect costume for the perfect occasion.  A great part of that has to do with the excellent Costume Designs by Shon LeBlanc whose costumes provide a stunning recreation of the period.  LeBlanc is an extraordinary craftsman.


Odalys Nanin as Mercedes de Acosta, is fresh and cagey, and she has an uncanny ability to woo these women like no other.  And the fact that she’s Cuban gives her emotion leverage on her European counterparts. Still she fights for what she wants and generally gets it. Even in the end, near her deathbed, she comes off a winner.


That’s what happens when you tease an old pro. – Mercedes de Acosta


Lina Hall as Greta Garbo made a stunning entrance.  Cloaked behind the large hat she wore she stood motionless waiting for the right moment to be approached.  Subtle in her approach to the role, eyes expressing much emotion but not giving an inch, she stood statuesque waiting for someone to adore her. This is a wonderful role and a wonderful performance.


Erin Holt as Isadora Duncan and Isabela makes another grand entrance in a dress that would be provocative in my Tennessee hometown.  Let’s face it; she could not even wear this on prime time television.  Still, she was wonderful in the role, funny and quirky in a very appreciative way.   For the most part as Isadora she dances her way across the stage and one time, unexpectedly danced right into a flat which put the audience in stitches.  She is absolutely an actress that will put a smile on your face. 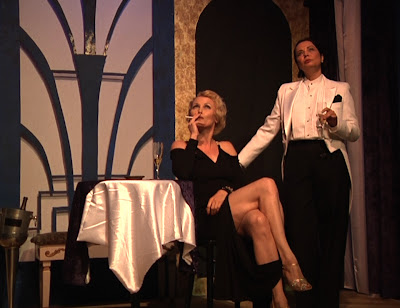 Vera Petrechenka as Marlene Dietrich was equally stunning in her entrance. Her European/Moscow background added a secret elusive and important element to her portrayal.  After being introduced to de Acosta, she sat on the sofa, parading her legs and with each refined crossing she seeks an intimacy with de Acosta. Nicely done!


Lisa Merkin as Salka Viertel is an actress that knows her craft.  With this role she pushes all the right buttons, has the right flavor to the character and in some ways fights to stay afloat in Hollywood by using a friend to steal.  Despicable in some arenas but in Hollywood, business as usual. Merkin was enchanting as Viertel.

John Nagle had all the male parts Irving Thalberg, Editor, and the Butler. He was a rather robust Thalberg who you could not characterized as being robust.  Thalberg had a number of medical problems and this could have been included in this portrayal.  That aside, Nagle did a fine job as the editor and the butler giving those two performances a kind of stepping out of the time capsule thing.


Ginger Pennington as Poppy did a fine job as de Acosta’s lover.  She fights to have Greta out of their lives and succeeds on many levels.  Ernesto Mijares as Father’s Voice talks some sense to de Acosta.


Elyse Mirto as Greta Garbo and Julia Kostenevish as Marlene Dietrich were not playing these roles on this particular night but will be seen on other nights.


Odalys Nanin as the writer delivers a play that works on many levels. It is charming, funny, hilarious and quirky at times.  While this is a very fine production, there are moments to be tweaked, battles to be won and lost and characterizations to be slightly elevated and refined. But these are only small quibbles to a wonderful show.  Also de Acosta has a wonderful backstory that could have included as part of the physical life of the character.

Laura Butler and Odalys Nanin as co-directors did a wonderful job.  The introduction of all of the characters was just delightful.  It’s hard to tell where Butler left off and Nanin took over. The relationships were excellent.


I wanted to speak about the Garbo “leaving scene”.  While it is true de Acosta was heartbroken when Garbo left, de Acosta did not fight hard enough for Garbo.  This is a battle of epic proportions and needs both actors on stage fighting furiously.


Also, a little more “cat and mouse” play would add to an already delightful evening, but still there’s so much fun to be had here!