“I don’t like flying.  My stomach starts doing strange things.  And my body changes in ways you cannot believe.  And yet here I was ready to get on a non-stop United flight to Newark, New Jersey.

They do things differently in at the Newark airport.  Hailing cabs at the airport requires you to punch a machine with information, getting a paper check, and then waiting for a cab to take you to your destination.

Our cab driver was Haitian who drove very fast weaving in and out of a rain-slicked road. I gasped a couple of times at the near misses this Thursday night.

And the guy on the radio said New York had the fourth best pizza in the nation.

Having a very nice Italian take out, cheese, crackers and wine, I retired for the evening to my room over looking the Upper West Side and the Hudson River. I’m six foot six and afraid of heights and as I looked out the window of the nineteen story penthouse I said height wasn’t an issue as long as I thought I was on the first floor. Clearly, I needed a diversion.”  - Narrator

The present study examines the emotional and hormonal responses to tango dancing and the specific influences of the presence of music and partner on these responses. Twenty-two tango dancers were assessed within four conditions, in which the presence of music and a dance partner while dancing were varied in a 2 × 2 design. Before each condition and 5 minutes thereafter, participants provided salivary samples for analysis of cortisol and testosterone concentrations and completed the Positive and Negative Affect Schedule. The data suggest that motion with a partner to music has more positive effects on emotional state than motion without music or without a partner. Moreover, decreases of cortisol* concentrations were found with the presence of music, whereas increases of testosterone levels were associated with the presence of a partner. The authors' work gives evidence of short-term positive psychobiological reactions after tango dancing and contributes to understanding the differential influence of music and partner.

(*a steroid hormone released in response to stress)

I saw Mr. Chmerkovsky heading into a restaurant after the matinee performance and I told him  “Nice job today!”   He said thank you and quickly walked away.

The tango originated in the lower-class districts of Buenos Aires, Argentina and Montevideo, Uruguay and is a dance that has influences from European and African cultures.

As the red curtain lifted from the stage, the upstage wall was sprinkled with stars and slowly the lights on the orchestra enhanced the setting to view men playing the Bandoneons:  Víctor Lavalléen, Carlos Niesi, Jorge Trivisonno and Eduardo Miceli, the sound that makes tango, the tango.

Silently, and downstage right, Juan Paulo Horvath appeared to be lifted behind an excessively large Bandoneons on stage and he waited while a beautiful Victoria Galoto joined him in a marvelous opening number, Preludio del Bandoneó y la Noche.

I found it fascinating the dances told a story mostly of want, of love, and of revenge.  The couples meet, and there is either a fascination or mutual repulsion.  Either way, they both are enchanted by the act of dancing, forced or otherwise, and embrace, bringing together the feelings shared between a man and a woman, the beating of two hearts.  I especially found this to be true in El Suburbio, a dance of passion, struggle, and want. 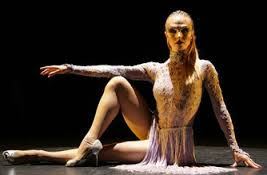 Juan Paulo Horvath and Victoria Galoto are exceptional dancers and choreographers.  They dance so close, the steam from their bodies has little chance to escape, the footwork impeccable and magical sometimes not knowing where the man ends and the woman begins.

Marcela Duran and Gaspar Godoy find a way to put so much human emotion in the dance without changing the passion from their esse in the dance Soledad.

Natalia Turelli and Ariel Manzanares provide a very funny comic turn and certainly was a crowd favorite in their dance of La Tablada and Felicia. Ariel Manzanares has a slight tuff in hair in the center of his scalp gives off the appearance of an accountant after a long day who jumps at the chance to dance with anyone, should she accept. And she seems to accept, very hesitantly. Odd, that he doesn’t take the woman rather he slides into her gently and away they go.

I don’t watch television so I didn’t know Karina Smirnoff and Maksim Shmerkovskiy but they were a crowd favorite and the audience enjoy their dance, choreographed by Juan Paulo Horvath and Victoria Galoto.

This show has been running in New York for quite a while.  I found an interesting article about the Tango Argentina here: http://tangovoice.wordpress.com/2009/12/05/the-essence-of-tango-argentino/

Luis Bravo was the creator and director of this fine show and it moved seamlessly from beginning to end.

The wonderful music was led by Orchestra Director Víctor Lavellén and the melodious Arrangements & Orchestrations were provided by Lisandro Adrover.

Run and take a friend who loves to tango.