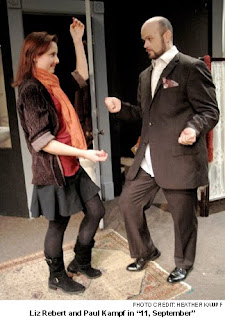 Chaos is a science that offers a way of seeing order and pattern where formerly only the random, the erratic, the unpredictable, in short the chaotic – had been observed. The San Francisco Chronicle.

Remembering the chaotic events of 9/11 is an emotional endeavor that takes you to places you may not want to go. You Tube can be a constant reminder of the events from that day if you are so inclined to view. For most of us, it remains clear, like it was yesterday. Those who don’t remember or have selective memories generally fall under the category of government officials as they pour out revisionist history like milk into a glass.

11, September written by Paul Kampf and produced by Breadline Productions is an exciting production with fantastic performances and is now playing at the Odyssey Theatre in Los Angeles through February 7, 2010.

This is the story about a divorced mathematician, Martin Healy (Paul Kampf) an American who is in town (from London) to give lectures at New York University. He lectures on the mathematical probability of three towers falling from fires created by the jets that slammed into two of the buildings. There are truths he wants to disclose.

Only he has a problem, he’s done this so many times he’s hesitant about discussing the events of the day. There are personal distractions that weigh heavily on him during the course of his lecture. He stops, apologizes, and leaves the podium.

Later that day he meets Angela Madison (Liz Rebert) who invites him up to her one room flat for a round of chaos under the sheets (pun intended). Her swagger in her comfortable surroundings begs for an immediate response from her willing accomplice. She starts taking off her clothes in front of this stranger, steps behind a sheer screen, and slides into something alluring, soft on the hands, and cool to the touch.

Healy, the mathematician and chaos lecturer, is taken aback. This has only happened to him once before. He is a little uncomfortable by the speed of this event.

Angela’s phone starts to ring. She doesn’t answer it and it is this moment Healy starts asking the questions. The answers are not yet provided.

And as Martin sleeps, Angela is in the bathroom reading to someone on the phone part of a Martin’s journal or diary.

Later in the morning, Angela, in a foul mood, lights a cigarette, waits for Martin to get up and then tells him to get out. There is something really not quite right with this woman.

Puzzled by the current circumstances, Martin does not take her rejection, and instead invites Angela to breakfast. The phone starts ringing. Angela tells Martin it’s her crazy boyfriend (one bit of truth out) and he will hurt both of them if he doesn’t leave. Martin won’t take no for an answer and takes her out. They leave and when they come back we find that he’s gotten punched in the eye and has a couple of busted ribs. But, he has won the fight.

Angela said it turned her on.

They make it, again.

There are a lot of ways this indecorous couple become attracted to each other. One is fate the other is a point of reference. They share a similar past that cannot be revealed. A future that cannot be shared. It takes them both to hell and forever changes their lives.

The acting is strong. Kampf as Healy is quite good. Kind of dorky at times (check out the dance moves), but a strong character actor. His moments at the lecturn were brilliant.

Rebert, as Angela, is a remarkable actress. Moving in and out of the shadows of her own self-consciousness. She is flaky one minute, loving the next, demanding, supportive, gracious and hateful. She lives for a moment of truth, a dramatic action that eventually destroys her life and the lives around her.

Kampf, the writer, takes us on a pretty good journey. Although, somewhere in the middle, (the scene with her in the rocker and him on the bed) gets a little convoluted and gets confusing. There are a number of chaotic truths that lead to the perfect final resolution: or does it?

Each one of them has a secret truth that is revealed during the course of the play. There are a number of truths in the play. The play plays out like many mini episodes that demand a commercial break. Find out a truth, cut to a commercial, get some more truth. Still, the play is pretty good.

The Breadline Group has moved recently from Chicago to Los Angeles. Welcome.