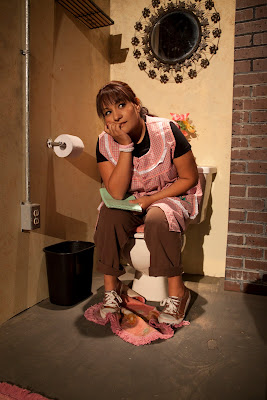 The new Casa 0101 Theatre in Boyle Heights is a beautiful theatre, a wonderful space with plenty of free and nearby street parking.  It is a testament to the power of free thinkers who have gone all out to improve the community and provide an avenue for Latino actors in the barrio. It is, by all discriminating accounts, the crown jewel of a historical communal enclave of Latino culture and tradition.


Not a lot of 99 seat theatres have this much opulence, a grand ticket booth, a wonderful lobby, a wall of beautiful Latina art, and a place to mingle during intermission. This is a beautiful space not only for Boyle Heights but for Los Angeles as well.


Now playing is the 20th Anniversary of Real Women Have Curves by Josefina Lopez, the founder of Casa 0101 and directed by Corky Dominguez through October 23th, 2011.


If you get there a little early, the window doors might be locked, but you might get a glimpse of Josefina Lopez swaying in the lobby.  Lopez dances in her new home at Casa 0101.  Pirouetting from one flower arrangement to another all in the pursuit of perfection for this theatrical happening.


As the doors open one immediately feels at home in this version of Casa 0101.  This is a far cry from the same theatre company located across the street where patrons had to cross “the fourth wall” to get to the bathroom.  Still, after exiting the bathroom, each patron got a welcomed ovation (a star after their own making).  The new comfortable chairs in this rendition of Casa 101 is a far cry from cold and hard folding chairs where one witnessed the delightful Ojala which were a little uncomfortable.


Briefly the play is about a group of women, a family (in reality and figuratively) who come together in a sweatshop to make dresses for a high-end department store.  They make dresses for $15.00 each and these same dresses sell for $150.00 each.


These women are not just sweatshop workers but real people with real problems.  Rosali (Noemi Gonzales) has lost a lot of weight and is thin compared to the other women but she is addicted to diet pills. Carmen (Jonee B Shady) is fifty something and pregnant, again.   Pancha (Martica De Cardenas) desperately wants to become pregnant. Estela (Miriam Peniche) wants anything that resembles a relationship.  And Ana (Margie Gutierrez Lara) is eighteen years old who wants to become a writer.  They all dream of a better life. Certainly, these are objectives one can really sink their teeth into.


And nobody likes Carmen’s mole sauce.


Estela is working under the gun.  She is the boss and it’s her shop that she keeps locked day and night. She is getting behind on paying her employees.  And two of her employees are her mother, Carmen, and her sister, Ana.


Ana, the writer fills the audience in on her private moments, the struggles of the business, and her dreams of becoming a writer.


But, there is a problem with the business. Estela has taken the payroll money and has bought more equipment that she can’t afford.  She has made the decision to defer salaries in order to produce more clothes.  It is a dream that gets her into a lot trouble with her employees.  And they are so close to closing the shop that it’s not even funny.


Although this is a Latino play with Latino women, the important aspect of this play is that these delightful characters are ordinary women caught in extraordinary circumstances.


Margie Gutierrez Lara as Ana had a lot of very nice moments.  She is passionate about her life and the words she puts on paper.  And this is the only thing that motivates her.  It is that motivation that guides her actions on stage and nothing else.  This underlying dream must be locked inside and be a guiding force that propels her actions on stage. Truth comes from that force.  Still this was a very nice performance and a very nice job.


Miriam Peniche as Estela was absolutely wonderful in this role.  There is a grand sense of struggle in her character for not only her professional but personal life as well.  Like the waves from the letter she reads, she is a tsunami of her own making on stage and in character.  This is truly a wonderful performance with an inner conflict that stays with her from the moment she steps onto the stage to her curtain call.


Martica De Cardenas as Pancha is quite charming and delivers a very nice performance.  There is an underlying truth in her characterization that is subtle and imaginative but not completely without fault.  For example she is a woman who wants a child and then she discovers the fifty year old Carmen is pregnant, again.  They all seem to dismiss this as fantasy but Pancha should believe it and this information should affect her to her core. Ultimately, she has to decide whose side she is on and this thought or idea can add creative mileage to her character so that her breakdown in the bathroom means more to the audience. Not to take away from a very fine performance but just to add one more dimension.


Noemi Gonzales as Rosali is very cute in this role. She is the envy of all her co-workers because she’s is slim and attractive (scratch that, very attractive) but she also has a problem that she needs to take care of before the end of the play and she does this wonderfully.  Gonzales does an exception job and is very comfortable on stage.


Jonee B. Shady as Carmen is the matriarch of the group.  Mother to two of her co-workers and she is also pregnant.  There are many imaginative ways this character can go and a variety of ways to manipulate other characters on stage in her predicament that would only add to an already nice performance.


Corky Dominguez, the director, has done a fine job putting this together.  There were a lot of marvelous things that rang true. Still one is not sure why the women were hiding from La Migra on two or three occasions when only one woman does not have her green card. Or why when one character found the mole sauce stain on the dress in the trash it did not significantly matter to her.  She must have thought that all were conspiring against her at that point.  Also, one believes, there’s a lot more creative mileage to be had if they believed Carmen was pregnant.


Josefina Lopez, the writer, has written a play for all the right reasons. It is a play about the plight of women, and the hardships they endure to provide for themselves and their family. And the fact they are all Latino women just adds an extra flavor to the soup of humanity. There is a lot of warmth to this play and a lot of sizzle to their style. 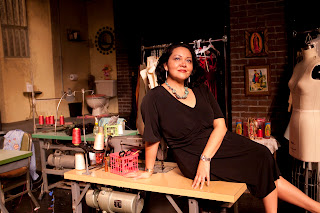 Lopez has written an important play because, let’s face it, Latinos and Native Americans are written out of the American landscape in television and in the movies. Brown skin and brown eyes does not make this culturally rich segment of our population less compassionate, or less caring, or less complicated.


Run to see this production!