Tartuffe (or The Hypocrite) by Jean-Baptiste Moliere, adapted by Ellen Geer 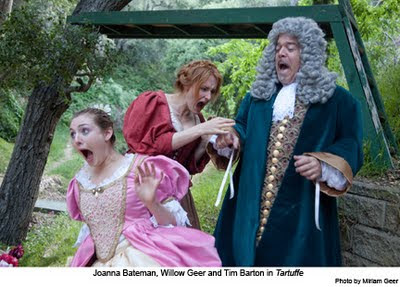 Driving up Topanga Canyon Road at a leisurely pace and with fourteen cars behind me I  wonder if I should step on the gas so that actors can get to where they need to be on time.  And then there are these other thoughts:  What if I increased my speed and that caused me to slam the car into the rails and over the cliff.   What is the weight of the car?  Going x amount per hours?  How would the rails hold?  Or would they?  What is the speed in which the car jumps the rail and down the embankment producing a fiery ball of human flesh?

But then I remember, this is Topanga Canyon and it’s okay to drive leisurely here (for me).  Let the other people (actors) worry about their time management. Just relax and take the curbs like a man who’s not in a hurry.

Then, the city starts falling away from the subconscious thoughts along with the worries.  Moments later come the good thoughts, along with the clean air, and the fourteen cars turn into two. I feel warm.

Tartuffe by Jean-Basptiste Moliere and adapted by Ellen Geer is a wonderful production now playing in repertory at Theatrical Botanicum.   This particular production includes 10 original songs written by Ellen Geer.  Take a bottle of your refreshing beverage of choice, bring something warm to wear, something to sit on, and marvel at this troupe of accomplished actors in this wonderful setting.

Theatricum Botanicum is one of my favorite theatres in town.  It is a small trip away from the madness that is Los Angeles but well worth it and one is sure the blood pressure drops 10 to 20 points.

Tartuffe is slightly altered as the Cleante (Alan Blumenfeld) introduces the King (one of the audience members) and thanks him for allowing the play to continue in spite of an outcry from the Catholic Church, particularly the Arch Bishop of Paris.

In this version, and in Morning Prayer, Tartuffe (Aaron Hendry) as the priest is introduced laying his hands on his flock of sheep (parishioners) and driving out the demons.  It is a remarkable moment that gives us an understanding of the character that is Tartuffe, a man so in touch with the heavenly spirit that no man can compare with his teachings.  He walks, hand in hand, with God bowing his head in humble servitude.  (Or is that just the way he walks?) 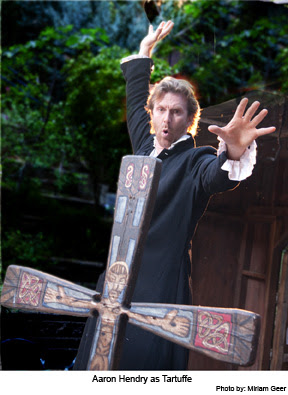 Madame Pernelle (Katherine Griffith), the matriarch, is angry with her family.  She is a firm believer in Tartuffe.  She is old and one might suspect she is “nearer to God than thee” and she accepts the manifestation and teachings that is Tartuffe.

Unfortunately, no one in the room agrees with her.  Elmire (Misha Bouvion) her daughter in law, Damis (Daniel Billet) her grandson, Marianne (Joanna Bateman) her granddaughter all think he is an imposter.

Your Monsieur Tartuffe is a blessed soul, no doubt – Damis
He is a good man, and should be listened to; I can’t bear, with patience to hear him cavilled at by such a fool as you – Mme Pernelle

Even the maid Dorine (Willow Geer) has some choice words about Tartuffe.

He passes for a saint in your imagination; but believe me, all he does is nothing but hypocrisy. – Dorine

Can a man love another man the way Orgon (Ted Barton) loves Tartuffe? Cleante thinks it is unnatural and he is his brother-in-law and the intelligent voice of reason in this play.   He tries to talk some sense into this little silly man.  But, then he discovers that Orgon wants Tartuffe into the family and wants Tartuffe to marry his daughter Mariane.  Cleante says that she has been promised to another.

Mariane has her sights on Valere (Jackson McCord Thompson) if they could just get along for more than two seconds.  But, together in the room, they test their love for each other in devilish ways. (Their conflict from young love is a joy to watch.)

Tartuffe will accept Orgon’s daughter for his wife but he has his eye on another, Elmire, Orgon’s wife. (Isn’t this all so French!) And while Tartuffe is playing around with another man’s wife, Orgon’s son Damis finds him out!

Damis informs Orgon of Tartuffe’s hypocrisy and Orgon summarily throws him out of the house.

Get you out of my house this minute, and never dare to set foot into it again. – Orgon

Yes, I shall go, but- Damis

Quickly, then leave the place; sirrah, I disinherit thee, and give thee my curse besides. To offend a holy person in such a manner!  - Orgon

Ted Barton as Orgon does an amazing job. He is so aroused by conflict that his face turns bright red, almost like a radish.  He is so caught up in the man that is Tartuffe no one can talk sense into him. It is a very fine performance and a wonderful job and funny as funny can be.

Aaron Hendry as Tartuffe likewise gives an astonishing performance. From the moment he steps onto the stage to the moment he leaves. It is a performance filled with hypocrisy, seen or not seen by the other characters.  Crying one moment and laughing the next rolling around on the floor, begging for forgiveness, saving people all in the span of a few moments.  He is woeful, lecherous, forgiving, monstrous and self-righteous.  It is a performance to absorb and certainly not one to miss this season.

Joanna Bateman as Marianne is a gifted actress.  Wonderful to observe and takes each moment in stride.  Her father, and her fiancé pull Marianne, the character, in many directions, and with help from others she manages to overcome the many obstacles facing her.  Bateman has many incredible moments where one just falls for her predicament. It is a wonderful performance and a perfect fit for her.

Misha Bouvion as Elmire is very funny fighting off Tartuffe not once but many times. Her moments with Tartuffe on stage are captivating particularly with her husband, Orgon on stage, under the table.  Fighting a fever has no comparisons as fighting off a man with a mission.  Bouvion’s performance was delightful.

Alan Blumenfeld as Cleante seems to be the voice of logic in this play.  He takes his turn meeting with all of the participants for wise counsel but as wise as his advice is they seem to ignore him with the flip of a handkerchief.  One is not sure how this affected Cleante as the actor who seemed to be so mild mannered and take things in stride in comparison to the hot heads that surround him. One is not exactly sure if his objective was achieved.  Still, it is a very nice performance by a wonderful actor.

Willow Geer as Dorine is a very physical actress.  A true professional that hits her marks and makes waste of the nonsense around her.  Her character, the maid, is the voice of reason and all seem to take her advice, but Tartuffe is in the way and he is an obstacle she must overcome to make sure things happen her way.  She gave a very nice performance.

Katherine Griffith as Madame Pernelle was very funny.  One suspects that her allegiance to Tartuffe is because she is nearing the end of her life and who better to be in support of than the person she perceives will open the doors to the pearly gates.  Nicely done!

Jackson McCord Thompson as Valere was fantastic.  The role is a very nice character study.  All this posturing reminded one of an ostrich with his head out of the sand and not knowing where to turn to next.  He takes his love seriously and he will have this woman. This is an outstanding performance with an actor that knows his craft.

Daniel Billet as Damis was practically the spitting image of his father Orgon.  He was a little bit more of a hot head than his father and willing to verbally lash out at Tartuffe.

Also included were a very effective supporting cast.  The servants with the nice voices were:  Kelly Derouin, Leah Gutentag and Sydney Blair.

Bill Durham nicely played M. Loyal.  Liz Eldrige as Flipote was quite good and William Reinbold played the police officer that was instrumental in bringing Tartuffe to his knees.

Cody T. Gillette played Laurent not particularly well but did a very good job as the Music Arranger and Keyboardist.

Ellen Geer does a remarkable job directing this work.  Her actors all hit the right moments and the play moves along at a very nice pace.  Also, the show is a very physical presentation and effectively unique.  The 10 songs are melodious but slightly less effective in moving the play along.  But, it is all nicely done. A great show and in repertory all summer long. (Note to Ellen:  It's a wonderful show!  You did a great job!)

Run to see this production and take your priest or minister!  The both of you will laugh the night away. 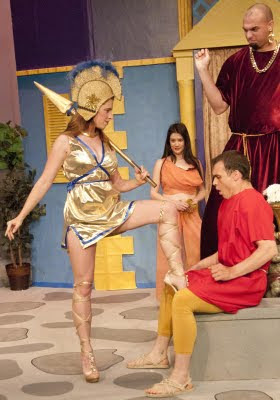