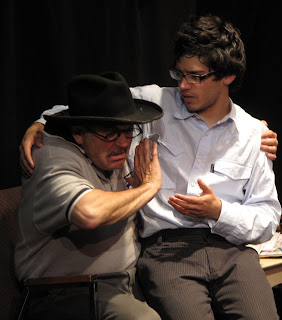 
Angelos written by Tony Perzow and directed by R.S. Bailey and presented by the TOP Theater is a wonderful new play at the Studio/Stage in Los Angeles. This is a feel good comedy with lots of laughs and wonderful characters inhabiting the scenery. And throw in a lot of young love and characters who still feel the love and are young at heart.

Angelos is a find! It is an exhilarating one-act play from the opening moment to the very end. Picture watching Cheers, set in a barbershop, throw in a young Hasidic Jew deli delivery boy (think Jerry Lewis), robbing the place, and you have the makings of a play that is a lot of fun!

The play opens with Uncle Moe (Jack Kandel) under a spotlight sitting in a barber’s chair. He instructs you to say “Uncle Moe” when he appears and there’s no questioning it either. Messing with Uncle Moe is a cause not lightly taken. He is a made man in every sense of the word. Favors are granted but expect to repay those favors until you choke on your last breath.

Today and probably most every day he is cutting Barry’s hair (Tony Perzow) because Barry’s got money and likes to look good and likes it when other people think he looks good.

But let’s not stop with the hair, Barry, (racing form in hand), is getting the full treatment. His nails are nicely manicured by Brocha (Tina Saddington), an Israeli with a huge beehive hairdo that would topple over mere mortals devoid of a strong neck.

And his shoes are being shined by Mirror (Robert Fisher) an old African man from an undisclosed African country. Nobody knows where he came from or why he stayed. And nobody knows what he is saying but everyone understands him. And they love him.

There seems to be one rule with the people who conduct business at Angelos and that is Angelo gets 5% of all transactions conducted in his shop. Opa!

And if I haven’t said this already Angelo is Greek and very opinionated! Wanting what he wants when he wants it! And this includes dressing down Brocha because she is just as opinionated and not right about anything (according to Angelo). It is an inimical relationship for reasons not entirely recognized.

Coming into the barbershop is Jimmy the Book (Stephen J. Schwartz) and Kelly the Scalp (Jerome St. Jerome). Jimmy carries a bag with items for sale most notably lizard skin shoes and other stuff. They sit and play cards while waiting to make a sale and offering their valuable take on life.

Everyone has a unique perspective on life and no one is short on opinions. They’ve all seem to have lost something and are desperately trying to get it back.

Uncle Moe is the only one in control and he just sits in the corner, waiting for the right moment, engrossed in his Maxim magazine, when David (Frank Salinas), a deli delivery boy, comes in to deliver the food first and then to rob the place second. Why? Because, he is in love with a gentile, Maria. And love does strange things to hormonal misguided young men.

At first they do not take this boy seriously until the gun goes off and that’s when things go into high gear.

Everyone in the cast jumps into their character with great satisfaction. Knight as Angelo was absolutely wonderful.

Perzow as Barry was very funny and willing to take control as well as share the stage.

Saddington was marvelous with her beehive hairdo and is very willing to offer a woman’s perspective for the good cause.

Schwartz as Jimmy the Book has a high pitched voice and appears to have stepped out of a Peter Lorrie movie. What fun!

St. Jerome as Kelly the Scalp was fantastic and in the moment from beginning to end. What a wonderful performance from an actor who listens and reacts with the precision of a skilled musician.

Fisher as Mirror was very funny, quite unusual and specific in his tasks. It is a physically demanding role and well done.

Kandel as Uncle Moe and as Abba was a joy to watch.

Salinas as David was also funny and specific in his journey. He reminded me of a young Jerry Lewis, although not as funny! (I think Jerry would laugh at this joke.) Still, Salinas is a remarkable actor and wonderful in this role.

Angelos written by Perzow is etched from his memory of hanging out in a barbershop in Canada in a culturally diverse community. It is wonderfully written with rich characters and if there is anything I would work on is Uncle Moe’s final exit.

Bailey, the director, keeps things moving along nicely. The relationships work well with nicely developed characters and about the best thing I can say about this wonderful ensemble cast is that they all listened and move toward a singular objective.

It’s all about love. Opa! 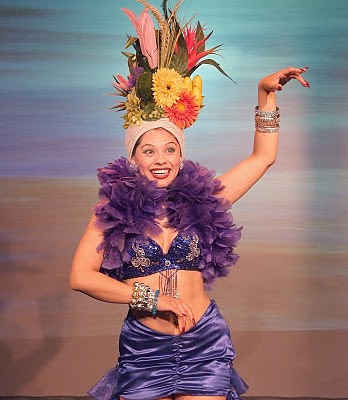 Carmen Miranda was a Brazilian legend long before she became a superstar in the United States. She was one of the highest paid entertainers in Hollywood during her time and what a wonderful way to recreate the magic of those times with the play, Carmen Miranda The Lady in the Tutti Frutti Hat, written by Sam Mossler and directed by Beto Araiza at the Hudson Backstage Theatre.
Magi Avila as Carmen is absolutely fantastic! Her smile in her musical numbers radiates a pleasure and passion that cannot be described.  The musical numbers are an astonishing achievement that will have you smiling from beginning to end.  Avila gives it her all with songs such as Mamae Eu Quero, Tico Tico, South American Way, I, Yi Yi, Yi, Yi, I Like you Very Much, Chica Chica Boom Chic, and Cuanto Le Gusta.
Carmen’s costumes are marvelous and her hats are equally fun.  What makes this all the more remarkable is that Avila designed all of her costumes.
And what is it about a woman with fruit on her head, sequins on her clothing, and swinging hips that makes her so alluring?   One need only view the show and affirm your instinctive biological drive.
Backed by a seven-piece orchestra, the night was a musical fun filled night, delightful in many ways, and wonderful throughout the night. Some of the members of the band played various personalities from her heyday. Geremy Dingle was wonderful as Lee Schubert and imitated a number of personalities including Jimmy Durante, Jerry Lewis, Cary Grant, and Mel Torme.
Jeff Markgraft, the bass player, played Dean Martin and Eddie Jackson not great impersonations but workable, nevertheless a very fine musician.
Dennis Kaye, the musical director as well as the producer, kept things lively and sparkling with his seven piece orchestra (something rare in Equity Waiver theatre) which included Dingle on trombone, Markgraft on bass, Michael L. Solomon on drums, Ron Hershewe on guitar, Cengiz Yaltkaya on piano and Bob Couto on trumpet.
The show has a lot more to offer but because it is in its infancy stage it has the capacity to grow a great deal.  Think of this as the out of town tryouts.  Written by Sam Mossler it briefly touches on Carmen’s life.  It is not very dramatic in its book but there was a quiet moment near the end of the show that spoke to the heart. Still, the show doesn’t lead to that point.  We are in fact missing the core that should carry the show from beginning to the very dramatic ending.
One question remains:  Is it a nightclub act or a musical? (Okay, two questions.)
If it’s something more than a nightclub act then we need to see all that comes with having a successful life. It’s not enough to see Carmen floating through life without conflict.  We need to experience conflict through her song and her dramatic life.  And there is plenty there to bring on stage.  Love lost, bad marriage, drugs etc., and overcoming incredible obstacles are constant themes in Hollywood.  The final resolution makes the journey heartfelt.
As it is now the director, Beto Araiza, uses the audience as a confessor but is it possible a bandleader as confessor could be an answer? Also, with the show growing as it is, Beto needs to throw out the bad and bring in more of the good.  And there is a lot of good in this show.
Daniel Coffman, the choreographer, brings Carmen to life.  It is a very nice job. Adalberto Lujan, the Set Designer, provides us with a set that looks like a Las Vegas set up, but very nicely done. Steven Pope, Lighting Designer, needs a spotlight on Carmen, which might be difficult to do in this 99-seat theatre.
The Hudson Backstage Theatre is not a good theater for sound. There are some problems hearing Magi Avila’s beautiful voice, as she articulates difficult Carmen Miranda songs, in Portuguese no less.
Carmen Miranda died at the age of 46 from a second heart attack the night she had finished filming The Jimmy Durante t.v. show. Her first heart attack is shown on a YouTube video while she was dancing a vigorous dance number with Jimmy Durante.
Hudson Backstage Theater
6539 Santa Monica Blvd.
Hollywood, CA  90038
Reservations: 323-960-7740
Through June 27, 2010
Posted by Joe Straw at 10:55 PM 2 comments: 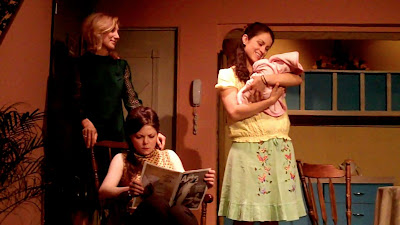