The Quarry by John Markland 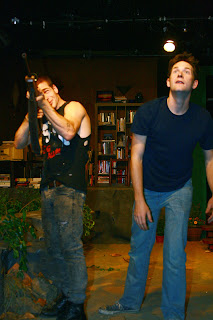 
Under a starry sky, a light, a glimmer of hope shines upon us all. At times in the darkness, and in that glimmer of light, we break down and speak a truth about unspeakable things and hope that compassionate people will listen and help guide us from that which is so painful.

At night, tears are invisible. They flow with the hopes that someone actually cares. But, now and then disaster strikes when too much information is released and the wicked heart acts on what is perceived to be a weakness and this causes the victim to turn away from the light.

People from this small New Milford, Connecticut town are brought together by mysterious circumstances only known by their creator. They are young and finding their way through the labyrinth of people they know of, but in reality, don’t know them well.

For these characters there's no need for them to ask the question: Why? They won't get an answer. They can only react and contemplate how they fit into the puzzle.

In The Quarry, a world premiere play written and directed by John Markland and presented by the Moth Theatre, the dialogue is laconic, the emotion powerful, the intent less direct and purposefully misleading that gets us cornered into a dark pit called the quarry.

The Quarry is a wonderful show for all the right reasons. It is a dark and brooding method style play that would have Stanislavski quivering with excitement. There are sublime objectives and gloomy characterizations of people trying to find answers to the important things in life only to be hammered by situations out of their control.

The story starts off late at night, or the early morning, with Pete (Zachary Shields) and Gary (Max Barsness) near the edge of the quarry, looking into the darkness of the pit below. (Google New Milford, CT quarry.) Pete grabs Gary and acts likes he’s going to heave him over the side, which scares the bejesus out of Gary. They've both have had too much to drink. It’s a great summer night and there’s still a lot of rifle shooting to do before the night’s done.

Pete, a chain-smoking teen (19), lives in a shed near the quarry. Among the garbage that litters the space, he calls this place home. “Four walls and a roof” that he built after he was abandon by his mother and father.

Gary (18) admires Pete’s freedom and his ability to handle a rifle. Gary, somewhat dorky, wants to live up to that which he finds manly in Pete. Pete is after all on his own, a year older, and a free spirit.

Pete questions Gary’s masculinity by goading him about getting laid and taking the leap off the ridge into the quarry, but Gary can’t get himself to do it. Not just yet. He’s got everything going for him, a girlfriend, and a ticket to college.

And then, Gary does the unthinkable, he jumps off the edge of the quarry, into the night, not to be seen or heard from, for what seems like an eternity. Underwater in the pitch black, his life force becomes an unresolved issue. And this was all for the sake of answering his questions on manhood.

Pete, on the cliff, seems to collapse in shocked until he hears the sounds of Gary splashing below.

When Gary reaches the top of the quarry, he is, soaked, elated, and triumphant. He tells Pete that he plunged so deep his head hurt and his ears felt like splitting. He also believes he saw a dead body in a car below.

But freezing from the plunge and with the night ending Gary is heading home and then off to college soon. He tells Peter to visit his girlfriend’s father, the minister, if he would like to talk.

Pete has an unknown emotional desire to visit the minister, RD (Nicholas Guest). RD invites him into the house for some food: a burger with a few things on it. And with the burger in Pete’s hand they sit down to speak about the important things in life, books. It is here that RD misses an important moment to connect with a teenager that is living on the edge in a make shift box.

Pete and Gary get together one more time before he heads off to college. They are shooting beer cans with the rifle when Gary mishandles the rifle and almost blows Peter’s foot off. Pete, the man that he is, struggles with the gun and breaks Gary’s finger in the process.

Later, Pete visits the minister again, but this time runs into his young precocious sexually charged daughter Jessica (Addison Timlin). Her sexual advances are questionable motives as she really has something else in mind, which is not revealed until later.

Pete has a second chance with RD and about the only thing that gets resolved is that RD is not to touch him. Under any circumstances. No touching! This is a second opportunity missed. Whether it’s a homophobic cause or otherwise is unclear because no one is willing to set the cards on the table.

Wow! The Quarry is an amazing play! John Markland has written a work of art that in and of itself is a story of non-communication. This is a play filled with quiet dialogue that requests your presence at every line. It is a play about people reaching out; without knowing what they are reaching for, without knowing what they want, about avoiding conflict when they should be talking about it.

The acting in this production is fascinating to watch. Audience’s members strain to hear the method like mumblings of a well tuned in cast. It is a style of acting that takes matters to the heart, multilayered and not forced. The emotions wait for the truth and the truth carries them leap and bounds beyond expectations.

Barsness is an incredible actor who holds his own with the other actors. He has a nice look for stage and film and is really doing some amazing work here.

Shields has so much depth to his character of a man trying to find his way, a loner, not able to cross his own self imposed bounds. He is also someone who is willing to go the extra mile to help others without knowing their problem. His emotions are not aggrandized because he doesn’t know how, and hasn’t been taught how. In the end his life is left to the decision he makes with the quarry. Whether it’s beautiful or tragic is left up to the audience to decide. This was a wonderful performance.

Timlin as Jessica can either be beautiful or supremely tragic as the circumstances warrant. Her motives are subtly unpredictable and not entirely sincere, but she wants something and needs a stranger to help her. This is a terrific performance.

Guest as the small town minister subtly tries to help anyway he can, but he neglects his own daughter. In the end it is a tragedy he cannot bear to witness or be a part of. He cowers in the corner of his own home unable to come to grips with the tragedy unfolding in front of him. He dedicates his life to the masses around him but neglects his daughter and others as their lives are destroyed.

This groundbreaking new play by John Markland and produced by Pamela Guest says a lot about people not being able to communicate with each other. They wait for the bombshell that never comes in the darkness and they are left to figure out their next move.

When one player jumps off the cliff into the quarry it’s as though he’s jumping to create a new beginning, but ultimately not knowing if the new beginning will be exhilarating or a painful action that leads to the unknown.

The Moth Theatre is situated in a pleasant bohemian part of town near Los Angeles City College. It's on Melrose but you are welcome to come in through the back. 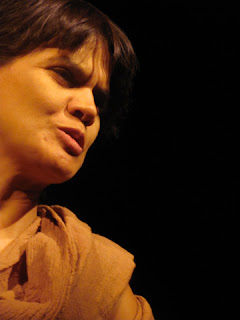 Measure for Measure by William Shakespeare 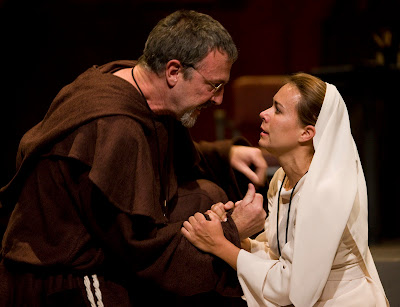 The Reckoning by Kimba Henderson 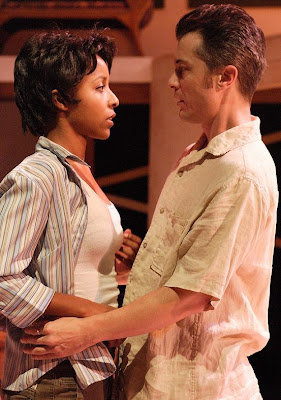