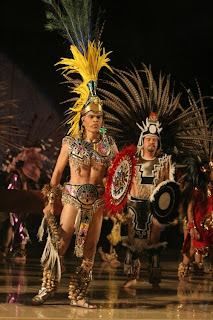 
One has to be impressed by walking into Our Lady of Angels Cathedral in Los Angeles. The Cathedral seems to embrace all who seek spiritual enlightenment. It is beautiful and layered with majestically stoned panels rising to the ceiling.

I gathered there to view the spectacle LA VIRGEN DE GUADALUPE, DIOS INANTZIN with four thousand of my other friends. And it is a spectacular play! Put on by the Latino Theatre Group in Spanish with English subtitles, directed by Jose Louis Valenzuela and written by Evelina Fernandez.

This manifestation has a cast of 150 dancers, singers and musicians in glorious feathered costumes of the Aztec Indians and tilmas of those who were converted and colonialized.

Slowly, the audience marches quietly into the Cathedral, men women and children waiting for the moment that takes them away from the distractions of life and places them into the center of the event. They then rejoice in song, Buenos Dias Paloma Blanca, to re-live the moment of December 9th, 1531 on a hill at Tepeyac, near Mexico City, when the peasant Indian Juan Diego sees the vision of The Virgin Mary.

Miracles come in all sizes. The visions that came upon Juan Diego may have been a moment imperceptible to others, but with eyes wide open he is receptive to the vision of a celestial being. And this being the Virgin Mary one knows there is work to be done, a message to be delivered and Juan Diego was instructed to physically carry out that mission. It was a vision to include all into Christianity, whites as well as Indians, Spaniards as well as Aztecs, rich and poor.

I go to see the genius that is Jose Luis Valenzuela and Evelina Fernandez and to watch these two take a production, that is virtually impossible to stage, and against all odds, perform a minor miracle every year.

Also it is a chance to view the remarkable talents of Sal Lopez and a wonderful Mezzo-soprano Suzanna Guzman. 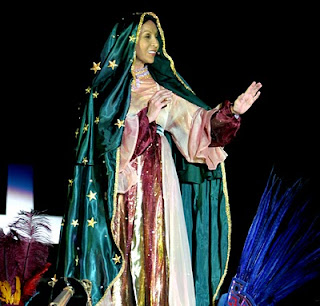 First one has to be supremely inspired by the voice of Mezzo-soprano Suzanna Guzman. It is here in the cathedral that her voice is smooth, melodious, and fills every inch of listening space. The walls cry from the sound taking it and giving it back to the listener. So remarkable the sound one would think it was not live, but a recording, and yet this beautiful voice fills the chambers and one can only think the voice was heavenly inspired.

Sal Lopez does a fantastic job as Juan Diego. He is funny, charming, and serious when the need arises. A regular with the Latino Theatre Group his strength lies in his tenacity.

Also amusing is Fraile Jose, Luis Lopez Aldana, a wonderful friar who happens to get himself into a lot of trouble but manages to find his way out.

The fine musicians were Los Hermanos Herrera, Martin Espino, and Christopher Garcia all under the direction of Alfredo Lopez Mondragon.

The angels giving us light, life, and hope were Andrea Zuniga, Olivia Delgado, and Alegria Garcia.

Holding on to their culture were The Aztecs who were Marcus Castain, Carlos Leon, Carlos Barajas and Ray Porras. 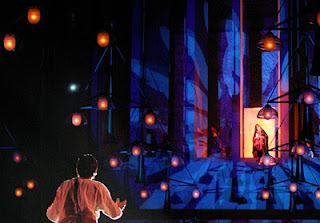 There were a number of people necessary to create this production, hundreds, and it all seemed to come together on this very successful night.
Posted by Joe Straw at 12:20 PM