The Santaland Diaries by David Sedaris 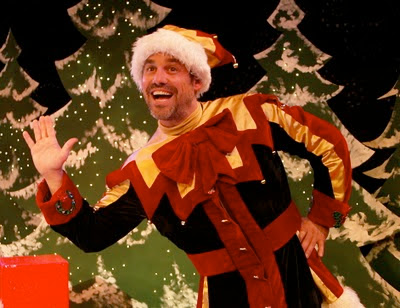 By Joe Straw
Nicholas Brendon has a face you know.   It’s easy to compare him to… nope, not going to do that.  And forget that I’ve seen him in Why Torture Is Wrong and the People Who Love Them by Christopher Durang this goes back farther than that.  It's a face with which one can relate. It is easy for him to communicate without dialogue. Just sit back and watch, he'll do the work. (And he does.)
And it is this face that takes us through the imprisoned thoughts of a writer, doing time at Macy’s, in the cold dead winter of New York City.
The Blank Theatre Company, Daniel Henning, Founding Artistic Director and Noah Wyle Artistic Producer presents Nicholas Brendon in The Santaland Diaries by David Sedaris, adapted by Joe Mantello, and directed by Michael Matthews at the Stella Adler Theatre, “darling.”
Just in time, when we just couldn’t get enough of Macy’s Thanksgiving Day Parade and tofurkey.  If one is having a bout of depression this holiday season this might be the trick to pump oneself up for the coming holiday festivities!  And one can’t think of a better thing to do than to see Nicholas Brendon running around all night long in an elf costume:  complete with curled toed shoes in Satanland, opps, Santaland through December 19, 2010.
First of all one has to get this out of the way, Brendon is a tall man, about 6 feet, in his stocking feet.  David Sedaris is 5 feet two inches, with lifts.  (Okay, so maybe it’s a slight exaggeration.) One could look at Sedaris and think “elf”.  One looks at Brendon and the thought process might be as follows:   “against type, non elf like beard growth, it could work, a little bigger Crumpet than expected, I have no problem with this. Let’s run with this!  Let's get on this sleigh, look funny, and enjoy the ride.”
This a story about a writer, Sedaris, fresh off the boat, in New York City trying to write for the soap opera One Life to The Guiding Light in A General Hospital as The World vomits,  (No comments, please.) when he comes across an ad for a job as an elf in Macy’s at Herald Square.
“Would you be interested in full-time elf or evening and weekend elf?”
Not to be cut off with a polite “thank you”, Sedaris opts for the full-time elf and is spirited away to lollygag with the Macy’s family of Santas and elves.  He adopts the name Crumpet.
But there a problem, Sedaris has a hard time getting himself into a happy elf mode (as well as his costume). In any case, it’s a great opportunity to put those misunderstandings in a diary from pen to paper.  After all, one doesn’t get a job like this and not pay attention to the finer details of one’s co-workers characterizations. Sedaris takes a look at the specifics of human frailties and faults and maximizes them on paper to the “nth” degree.
“You poor, pathetic son of a bitch. I don’t know what you have but I hope I never catch it.”
The story goes something like this.  Man is hungry eating soup in a restaurant and looking for work in the want ads.  Man finds job as elf.  Elf, not good at math and finding the work overwhelming, tries to ease into the job.  Elf finds out his co-workers of Santas and elves are the emotional have-nots in society. Elf falls in love with another elf, Snowball, only to have his heart broken.
“Snowball just leads elves on, elves and Santas. He is playing a dangerous game."
And then Crumpet has to deal with the “evil customers”. It is amazing what parent will say to an Elf to make their child behave, Crumpet gladly obliges. Being pushed by customers can lead an elf to a life of crime.  And, in hindsight, it’s amazing how the wrong things said to a child can ruin their life forever.
Brendon is really working the room as Sedaris and for the most part has everyone in stitches. He has the ability to change into multiple personalities, from a master sergeant veteran elf leading in a moral boosting chant, to a costumer with a gravely voice that smokes from a hole in her throat, to the various Santas, and the various elves.  There is an extreme focus in Brendon’s work, a concentration so intimate and so playful the audience breathes with him.  The sweat pours off him as the result of the thick polyester itchy and scratchy elf costume, the tights, and the curled uncomfortable shoes all making this a heated spectacle to behold.
“Crystal has third-degree burns covering… 90% of her body.”
Michael Matthews, the director, is very imaginative and there are a lot of clever things in this production. But there are a few minor problems that need solving. There is a point where Sedaris is sad but this sadness does not take us anywhere.  Sadness is a breathless exhaustive state of being without an action to guide the character to another point in the story.   And in particular when one is on stage, alone, being sad, well, it doesn’t work. Still they’re a lot of good things to be said of Mr. Matthews’s direction.

Missing was the innocuous music that plays in all department stores.
Nevertheless, there were some very nice moments under the red light that gives the audience a time frame of the coming disaster, Christmas. But, look, its called The Santaland Diaries and without this idea of diary running through the show, this becomes a show of visual vignettes rather than the idea of listening to the morbid thoughts of a man during his most ridiculous self.
A note in Wikipedia suggests this is downtown standup and not a play.  Maybe so.  The adaptation by Joe Mantello has a hard time working as a play but works in vignettes and for that reason all may enjoy the ride.

But, look, if the adaptation means turning this into a play, why not go all the way with this?  You’ve got the nice set by Kurt Boetcher, nice costume design by Michael Mullen.  It’s a play!  A play!
"My co-workers are caught in the same predicament as me.  Some are actually quite bright including the Santa's."
With all the biting and clawing and maneuvering for position in these vignettes there is a sincerity here that I've been missing (for a few holiday seasons) that touches the heart and that’s what I like to see in a Christmas story.   It’s an incomprehensible loving truth.  It is welcomed. And it is heartfelt.
The Blank Theatre Company is a tremendous organization, a wonderful space, and opening itself to become a regional theatre.  There’s two dollar parking.  Go have yourself a great time at The Santaland Diaries in Hollywood.
www.theblank.com
Posted by Joe Straw at 8:58 PM