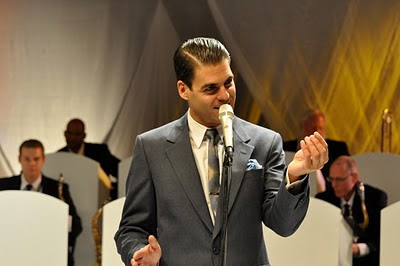 Come Back to Me would be a great song to end the show.
I'm coming in late in the run of this musical play to witness and write about my observations.  And the crowds are still coming! The joint is still hopping!  And it’s still playing after how many months?  Wow!  This is a true testament to Peach Reasoner, the producer, and the power of equity waiver theatre.  And this is the right kind of fit for the Edgemar Center for the Arts.
Run to this production and see the light.  It’s a light that alters a perception of a life and that is always a good thing.
www.hobokentohollywood.com
Posted by Joe Straw at 10:34 PM No comments:

Daddy by Dan Via 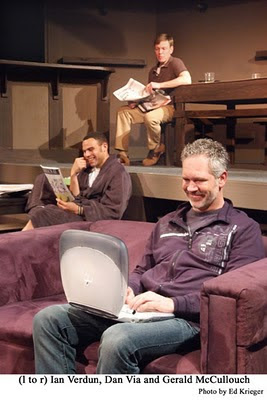 By Joe Straw
Acting is such a thankless task.
Everyone knows the obstacles when entering the theatre.  Visuals of the darkened alleyways, littered with trash, includes one more element to a sense of being as one enters the performing space.  And in the dressing room a three-legged chair becomes an impediment as one struggles to put on makeup in front a broken mirror with a nasty flickering light.  Usually this event is shared with other actors, some with bad personal hygiene, who have no sense of modesty and gossip about you even when you are in the room.
Putting those events aside, one realizes this is a short termed project and one needs to make the very best of the situation.  After all, this is a small theatre where the work is mostly without pay.  And that work is done all for the sake of turning a small roll into magic and spinning the small notice into a career.
It is during the curtain call, one’s heart grows stronger when a culmination of events makes one realize the concentration was spot on and the dream could not have gone any better.
It is a dream they all have. To work hard, day in and day out, and pray for the paying opportunities so that they may provide for themselves and their families.
I have thought long and hard about this list. The Last Straw Awards 2010 are given to those actors who were outstanding in their field.  Some of the actors listed below have huge careers, others are just starting out, and all deserve to be working regularly in this industry.
The actors are listed in order of the review, which may be found in this blog, January through December 2010.
There is no plaque or sheepskin to place on the mantle. Ultimately, when the day is done, you can’t take it with you and besides it only takes up space.  Know this; that people are watching and taking notice of your outstanding contributions to theatre in Los Angeles.
Congratulations!
Mitchell Edmonds (Pozzo) - Waiting for Godot - A Noise Within
Greg Watanabe (Kenji) - No No Boy - Miles Memorial Theatre
JD Cullum (Benedick) - Much Ado About Nothing - A Noise Within
Mark Bramhall (Dogberry) - Much Ado About Nothing - A Noise Within
Ensemble - Starmites - Ensemble Theatre Company - Miles Memorial Theatre
Natalie Storrs               Michael Joyce             Matthew McFarland
Jen Reiter                     Thomas Krottinger    Jonah Priour
Donald Webber, Jr.     Marisa Esposito         Riana Nelson
Jessica Perlman            Raquel Sandler
William Dennis Hunt (Philly Cullen) - The Playboy of The Western World - A Noise Within
Gina Garrison (Fran) - Supernova - Elephant Theatre Company
Tony Gatto (John Davies) - Supernova - Elephant Theater Company
Sal Lopez (Moe) - Dementia - Latino Theater Company (LATC)
Geoffrey Rivas (Eddie) - Dementia - Latino Theater Company (LATC)
Tony Perzow (Barry) - Angelos - Theatre of Possibilities
Frank Salinas (David) - Angelos - Theatre of Possibilities
Jerome St. Jerome (Kelly the Scalp) - Angelos - Theatre of Possibilities
Sheila Korsi (Anita) - Ojala! - Casa 101 Theatre
Jillann Gabrielle (Mrs. Kenderson) - Ojala! - Casa 101 Theatre
Gina Hecht - Circle of Will - Macha Theatre
Laurence Fishburne - (Thurgood) - Thurgood - The Geffen Theatre
Lin Manuel Miranda (Usnavi) - In The Heights - Pantages
Rogelio Douglas, Jr. (Benny) - In The Heights - Pantages
Arielle Jacobs (Nina) - In The Heights - Pantages
Earnestine Phillips (Harriet Tubman) - Carry It On - Theatricum Botanicum
Gerald C. Rivers (Rev. Martin Luther King, Jr.) - Carry It On - Theatricum Botanicum
Leith Burke (Zip) - Neighbors - Matrix
Zachary Shields (Pete) - The Quarry - The Moth Theatre
Dulce Maria Solis (Chela) - Chela - Santa Monica Playhouse
Alex Morris (LJ. Robillard) - The Reckoning – The Robey Theater Company (LATC)
Jacob Sidney (Nicholas Burnside) - The Reckoning - The Robey Theater Company (LATC)
Michael Faulkner (Elbow) - Measure for Measure - A Noise Within
Peter Larney (Abhorson) - Measure for Measure - A Noise Within
Stephen Rockwell (Herbet Pockets) - Great Expectations - A Noise Within
Deborah Strang (Miss Havisham) - Great Expectations - A Noise Within
Alice Fulks (The Actress) - The Blue Room - The Moth Theatre
Patrick Scott Lewis (The Cab Driver) - The Blue Room - The Moth Theatre
Nicholas Brendon (David Sedaris) - The Santaland Diaries - The Stella Adler Theatre
Suzanna Guzman (La Virgin de Guadalupe) - La Virgen de Guadalupe, Dios Inantzin - Latino Theater Company
Posted by Joe Straw at 11:22 PM No comments: