The Frybread Queen by Carolyn Dunn 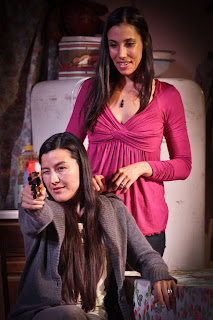 There are some wonderful moments in The Frybread Queen written by Carolyn Dunn, directed by Robert Caisely, and presented by Native Voices at the Autry.   Those moments occur when each actress comes before the audience (in character) and speaks about making frybread in their own fashion using their own recipe. More on that later.
The play is about a Native American family, two sisters (in-laws) from Los Angeles Carlisle Emmanuel Burns (Shyla Marlin) and Annalee Walker Hayne (Kimberly Norris Guerrero) who come to the Navajo reservation near the Arizona/Utah border to bring back Annalee’s seventeen year old daughter Lily Savannah Santiago Burns (Elizabeth Frances) to live with them.   One might characterized this play as an “Indian angst”.
The in-laws want to take Lily back to Los Angeles so that her mother, Annalee (who is dying of cancer),  can spend her remaining days with her daughter.  They are also both there to attend a funeral.
Presently, Lily is living with her grandmother Jesse Burns (Jane Lind).  Days prior to the in-laws arriving, Lily’s dad committed suicide.  Jesse wants Lily to stay with her.
But there’s a problem and that happens when the dearly departed comes back and makes life a living hell for those relatives remaining on earth.  It’s actually a small part of the story that strains credulity.
Lind was very agreeable as Jessie.  Her description of making frybread, the old traditional way, was a very nice moment of historical perspective and she uses this method as a way she goes about her life.
Marlin did a nice job as Carlisle.  She made frybread the faster and quicker way.  No freaking’ muss or fuss and it was good too.   She’s got all the awards to prove it.  The way she made frybread was against tradition.  Bring in the new and throw out the old and slow.  Fast rising is better than no rising at all.
Frances as Lily was in a character mode that was so extreme it sometimes worked or didn’t work.  The heavy gothic makeup, smoking and the youth attitude of “my life is a living hell and it’s all because of you!” wore a little thin. And she didn’t seem emotional wrought from her father dying days prior. But when she described her version of making frybread, she suddenly came alive, and was a multi-dimensional character.   It made a lot of sense and was poignant.
Guerrero as Annalee was sympathic because of her illness.  Her use of the oxygen mask is a testament to her struggles.  She was amusing as she told the stories of making frybread, so specific, technical, and surrounded by the people who would make a difference in her life.  She’s throws the “sickness” part of her character away when describing the story and it was just wonderful.  The moment she went back to the other character was less than inspirational.  Still there were some wonderful moments.
Carolyn Dunn, the playwright, wrote some wonderful things about the characters making frybread and their ways they went about it.   The problem of this production was the believe ability factor. To have the ghost of Paul come back and inhabit the bodies of both women he slept with stretches the story to the extreme and the truth meter goes way down on this one.  Stick to the truth of making frybread and real life associated with it.  Let the audience feel the life inside those moments when frybread is being made and let us explore the conflict during those moments.   Also, if a character makes frybread a certain way then her objective should create actions on stage the way she makes frybread. This will bring about touching moments that will be specific to each character. The conflict will rise like the dough in the bread.
Frybread should have been more central to the story the focal point where all things happen, where all is discussed, where all the characters make the frybread and the where conflict comes to them.
Robert Caisley, the director, had problems from the opening moment.   And looking back on this in hindsight they were big problems.   One problem was the gun.   Jessie finds the gun under the sink.  The response to finding the gun is to move it to another location, the freezer.  Seemingly without rhyme or reason.  And then Carlisle enters, as pretty as you please, without giving us any indication that someone has committed suicide on the living room floor just days before with that very same gun.  Also, actors were left floundering, center stage without an action to get them through the scene.   For instance the mother describing taking the gun and… (One is giving too much away.)  One really didn’t get the directors focus on this production. There are wonderful things in this play, which has strong possibilities but this version lacks the convincing through line this production needs.
There were some nice special effects on stage but those effects did not set any kind of mood for the action that follows.
Dawn Stern and Erika Stone were understudies for Annalee/Jessie and Carlisle/Lily respectively.
Native Voices at The Autry is a beautiful theatre.  Headed by Randy Reinholtz, the founder and Producing Artistic Director and is doing a beautiful thing in representing Native works.
Posted by Joe Straw at 7:26 PM No comments: 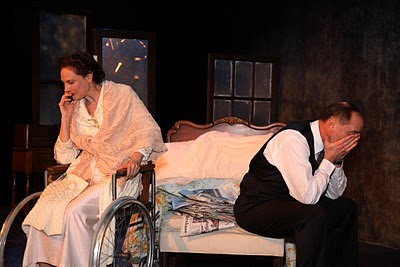 The Comedy of Errors by William Shakespeare 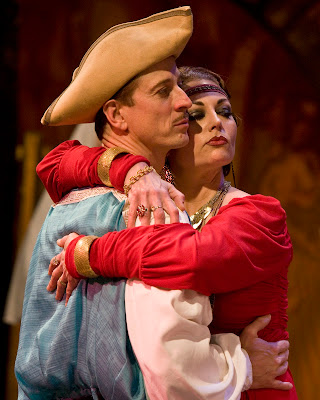 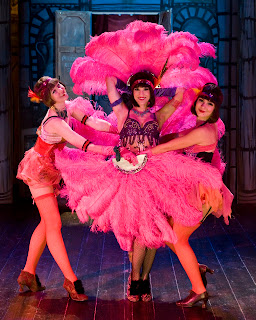 Lauren Robyn as the Courtesan was charming in the roll. She has a very strong voice, a compelling commitment to character, and a doer of good deeds. One cannot help but to enjoy the performance of the lead fan dancer.
Also filling out the roles were Andy Stokan, Christine Breihan, Douglas Rory Milliron, Gwenmarie White and Sarah-lucy Hill. These players were completely in tune with this production and each gave more than 100 percent in this successful production.
Film Director Ali Murtaza does a remarkable job in giving us a back-story. Scenic Design by Kurt Boetcher also remarkable in his ability to capture the look of vaudeville. David Bickford as the Pianist/Composer/Sound Designer also did a wonderful job in this production. One particularly likes the noise for “da chain”.
One can go to A Noise Within and be captivated by the attention to details on all of their productions. The work is remarkable and the theatre is good for the community and great for all of those who want to be enlightened.
Run to see this performance!
www.anoisewithin.org

The Cradle will Rock - Book, Music & Lyrics by Marc Blitzstein 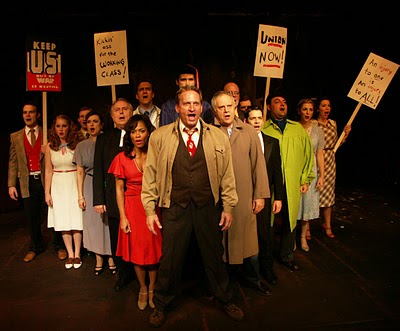 For tickets and reservations:  www.theblank.com
Go see this show.
Posted by Joe Straw at 11:20 PM No comments: