The Closeness of the Horizon – by Richard Martin Hirsch 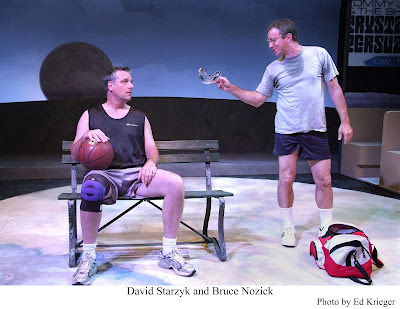 The year nineteen hundred and sixty nine was a year of change.  Not only change for me but change in the lives of millions of people across the United States.  In hindsight, the changes in our nation seemed to have little effect in my tiny community of Clarksville, Tennessee.  But there was much going on, the moonwalk, Woodstock, the breakup signs coming from The Beatles, and Vietnam.

Growing up in a military town in the south, it was common to hear a voice over the school loud speakers asking that we pray for a family member – a soldier, a hero, the father of six children, killed in Somewhere Nang, Vietnam.  This was a daily occurrence. And these announcements, even though we did not realize it, changed the enthusiastic mood of our day, the lives of our people, and the good hearts of a nation. And whether we liked it or not, someone was thinking that pushing us in that direction was making us a better nation.

So, everything about attending a performance of this play seemed right: the time, the astronauts, the moon landing, Woodstock, and Walter Cronkite.

Coffeehouse Productions presents a world premiere play The Closeness of The Horizon by Richard Martin Hirsch and directed by Darin Anthony as a guest production at the Odyssey Theatre.

The first thing one notices when entering the theatre at the Odyssey is the wonderful Scenic Design by Tom Buderwitz.  The visuals of 1969 are plastered on the proscenium arch, which serves to mentally transport the observer back to that period.  The moon, upstage right center, is a focal point with the wonderful stars of the Milky Way behind the moon.   The pleasing Lighting Designer, Leigh Allen, does a very nice job conveying the mood by changing the colors of the moon.

But first, there are two sentences on the front of the program, which caught my attention.

“True friendship is a journey.” and “There is no roadmap.”

I believe the first sentence is true but the second one is blatantly false.   There is a roadmap but one has to open ones eyes and read the map.  And there’s no napping along the way when you’re holding the map to true friendship.

In my heart of hearts, I believe this is the point Hirsch is trying to make.  That everyone needs to open his or her eyes and recognize the truth in establishing friendships and to work hard at keeping those friendships.

The play starts as a simple man stands in front of his destiny, the mirror, and contemplates the tie he should wear to his friend’s funeral. Rather than settling on the blue tie, he decides not to go.  In reality this is not a good testament to a friendship.

Flashback to 1969 when three friends, two players of a city championship high school basketball team and one manager, embark on a trip across the country in a beat up VW van. Gary “G” (Daniel Kash), the driver of the van, Paul (Bruce Nozick) on the passenger’s side, and Stein (David Starzyk) are taking a leisurely tour cross-country. The first stop from the westside of Los Angeles is the Grand Canyon.

But, on the way to the Grand Canyon they run out of gas.  (The gas meter is not working correctly.) G and Paul go for help and leave Stein with the van to contemplate his eating and waste habits. *

Later Stein, holding the map, falls asleep and they overshoot The Grand Canyon by a hundred miles. It is on this night, July 20, 1969 when earth is scheduled to hear the uplifting message from Neil Armstrong and Buzz Aldrin on the moon.  This is the night they listen to the voices of optimism of a can do spirit. And it is on this journey they bond like no other friends, playing pick up basketball games, and making some change along the way.

Cut to 1995, present day.  Paul takes it upon himself to visit G who is very ill and in a wheelchair.  His future is not at all promising.

G’s wife, Nissa (Mandy June Turpin), tells Paul not to expect much but asks him to stay with Gary while she runs out for errands.  And when she wheels him into the living room he looks worst than expected.  Nissa hands Paul a bowl of Cheetos and asks him to feed Gary.

Paul’s interaction with G is rather awkward and he has questions for which he needs answers but G has trouble communicating.

Paul does not want to feed G Cheetos. He has no tolerance for helping the infirmed, best friend or not.  He is frustrated that he cannot communicate with G. Paul is mad that G did not bother to pick up the phone and call him over the years even though they lived minutes from each other!  And he’s angry that G refused to accept his business proposition. Paul’s anger builds and culminates in his kicking G’s wheelchair, which throws G into convulsions.

Paul doesn’t know what to do.  He screams for help and holds G. Then we cut to black and moments later, we learn that G has died.  Nice work Paul!

So now there are two things Paul might want to carry with him into the next scene, the mystery of why G didn’t call and his guilt for just killing his best friend.  And there is a third reason which comes later.

But, meanwhile Paul is having a casual conversation with his wife, Annie (Shauna Bloom), about “G”’s death and there is a huge disconnect from the prior scene. When Paul wants to know why G never called him, Annie suggest that maybe the Nissa encouraged G to abandon the relationship.

(Editor’s note: There is something else going on here.  We know it.  It’s in the writing.  We are just not seeing it.)

Annie is a very loving wife and does a lot to keep physically fit.  And she does this for Paul because she wants more of a life with Paul.  But Paul, discarding his attractive wife, only takes notice of the purple water Annie drinks for hydration and even dismisses G’s death.

Paul has a dream of an astronaut walking on the moon and not kicking up dust. (Possibly Paul should kick up a little dust.)

Later at the funeral Stein gives G’s eulogy.  It has heart but little emotion.  Paul was a no show. Again, is this the sign of a true friend?

Stein and Paul meet later in a restaurant and they discuss the reasons why G never called him.  But they quickly get off that conversation and talk about the flavored colored high-energy sports drink with which he wants Stein’s involvement. This scene is remarkable and well worth the price of admission.

So Paul is obsessed with the high-energy drink, feels his business life is going nowhere, and wants his business future back.  But at what cost?

There are some truly wonderful moments in Richard Martin Hirsch’s play; overall it was a pleasant experience. I’ve never been a huge fan of flashbacks.  For the most part, they are a disturbing interruption to the narrative as a whole. Also, moving back in time 25 years, and have the actors play those roles in youthful exaggerated expressions leaves a creative unsatisfied feeling. But, that’s just me. Also I found the astronaut scenes to be somewhat disconnected from the rest of the play and could not find the relationship to the play as a whole.

But, I would really like to speak to the acting and the intentions of the actors in this write up. One could say this was opening weekend and maybe things have settled down enough in the play to be wonderful today.   For the actors, time in general, and in this setting, is very limited and one makes the best of limitations to try his or her best. 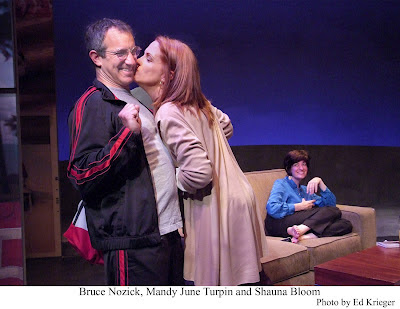 Bruce Nozick as Paul is madly in love with a woman and it’s not with his wife.  In order for this play to work we need to see this. Instead we get a man who is ambilivant about the other woman, more concerned with his sports drink, and really doesn’t care about his best friend.  For the sake of 1969 and “free love

,” he should be tearing this other’s woman’s clothes off. (In a manner of speaking.) Then this entire play makes sense.  Still Nozick does a very nice job.

Shauna Bloom as Annie plays the loving wife.  She has everything she wants with the exception of her husband.  She wants him to drop his new business and she wants the two of them to live off the money they’ve made from their prior business ventures and fly to Africa.  They’ve worked hard and she’s earned the trip. But when she finds out of her husband’s infidelity she slips into a depression of sorts.  If she really wants him, she has to fight to the bitter end. One is not sure that happened. Also, changing the costume in the ending scene would give her a stronger look and more able to fight the better fight.

David Starzyk as Stein does some outstanding work especially in the restaurant scene. It seems to be the perfect fit for a man of his talent and works on many levels, backstory, current story and future story.  This was a remarkable job of a character that has lived this life, sees the humor, and does the best he can given his physical accomplishments. Also Starzyk as Stein recognizes the complexities of all relationships and lets those friendships run it true course in his haimish ways.

Daniel Kash as G did a fine job.  As the character, G needs more work to shore up the relationship with his best friend.  Actually he needs a moment that establishes an unbreakable friendship. As a basketball coach, this character should be better developed. But there is a reason why G does not want Paul over to his house, which we discover later. And we should know the minute that he is wheeled in what’s on his mind, the hatred he feels for someone whom he trusted and who has ruined his life and his relationship with his wife.

Mandy June Turpin is fine as Nissa.  As the character, she is a puzzling creature.  In 1969, she is G’s boyfriend but she is also infatuated with Paul and kisses him. G sees her kissing Paul. So many years later when Paul comes to her rescue, she should throw herself all over him. Instead she plays it so cool, it’s hard to determine if there was any relationship.  Also she should be pushing her husband to accept the sporting goods business opportunity that Paul is offering if only to be nearer to Paul. Because in reality, she doesn’t want G, she wants Paul and the harder she pushes for that objective, the moments work better for the play. The night I saw it, she was confused and confusion doesn’t drive a character’s motive. Still, there were some grand moments that worked effectively.  Keep those moments and get rid of the stuff that doesn’t work.

Take a friend who lived these times.

*(Editors note:  Stein’s character is based on Chris Marlowe, a basketball standout from the Pacific Palisades high School 1969 basketball championship team, 1984 Olympic Gold Medalist, and a play by play announcer for the Denver Nuggets.)
Posted by Joe Straw at 11:12 PM