The Inventor, The Escort, The Photographer, Her Boyfriend, and His Girlfriend by Matt Morillo 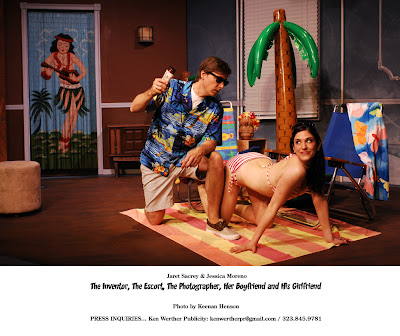 (Editors Note:  There is complete nudity in this show, explicit language, and adult situations.   Those who have never seen exposed flesh in their life should not go.  All others, with various fetishes, are more than welcomed.)

At the end of this performance on Saturday June 2, 2012, an actor laid on the couch, with his hands on his head, exhausted, or exasperated, or frustrated while the rest of the cast came out for curtain call.  He got up from the couch, grasped hands with his fellow actors, took his bows, and seemed in a split second to ask us (the audience) to forgive the night.

He did this because there were a number of people in the audience with pen and paper in hand and they were writing a lot of things, laughing, and grumbling.

This actor seemed to be asking for forgiveness. The moment was very sincere.  And who could blame him for asking; a lot of things went wrong on this particular night.  It won’t happen again.  No two performances are the same. Still, there is work to be done, a lot of work.

KADM Productions presents the west coast premiere production of The Inventor, The Escort, The Photographer, Her Boyfriend, and His Girlfriend written and directed by Matt Morillo.

“The Inventor…” is not really a play but two one act comedies strung together by a very loose thread.  The thread is those few characters that momentarily appear in the two acts.

The setting is a New York City apartment during the middle of a raging snowstorm.

Briefly, the first act is about an inventor, Jeffrey (Jaret Sacrey), who decorates his apartment in a beach setting to relive a sacred moment in his life. The room is filled with beach chairs, wilting blown-up palm trees, and a tiki-bar.

Jeffrey waits patiently for a high priced call girl to arrive.  He is excited about this game and wants to fulfill his ultimate fantasy.

But there is a problem, an exasperated Julia (Jessica Moreno) walks in his apartment in a frustrated mood because she has gotten drenched by a snowplow, and is mad that John didn’t immediately ring her up.  Not a good way to start the ultimate fantasy.

Julia is hard nosed about it all until she finds out that Jeffrey will pay her $3,000 to be his companion and have sex.  Julia is suspicious since it’s much more than her usual price. She done a lot of things with a lot of men but this just seems too weird.

Jeffrey has written a script for Julia to follow but Julia finds his papers that show he does not STDs. (Okay, too weird, but nice.) She finds the script and they run lines to get an idea of what he wants.  In it he sees a beautiful woman, pink top and tight white shorts walk across the sand. She takes off her shirt and then her shorts and sits lovingly in the beach chair.  He wants to re-create this fantasy with better ending results than the one he actually lived.  He also has various neuroses, he asks her not say “bikini”, or talk very dirty, and other things.

But, Julia has rules of her own, which involve “nothing kinky” unless it’s kinky for extra money.

They both agree to the rules, get into costume, and the game is on. But during the course of the game, they find out a lot about each other.  He is an inventor of sex toys that he demonstrates.  She has her masters.  He weighed 360 pounds at the time on the beach. She’s a lousy game player.  She has a heart of gold. 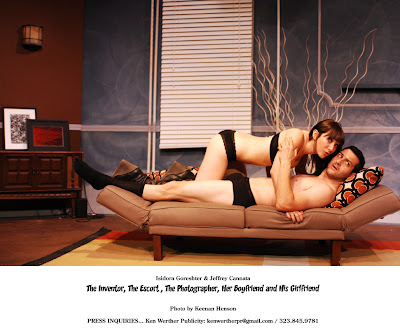 In the second act in another apartment, John (Jeffrey Camata), a comedian, is calling his girlfriend and asking if she is coming over.  He leaves a message on her cell phone.  Karen (Isidora Goreshter) doesn’t get it and storms into the room moments later, knocking the photographs, off the wall with glass and frames breaking underneath.

They are a couple that is considering breaking up because Karen had given John permission to have a fling.  Not a good thing when you are hopelessly in love. Unexpectedly for Karen John finds somebody right away and does the deed.

So much for true love.

Karen knows about it and is disgusted.  She takes out a bottle of Fabreze and starts sanitizing the room, specifically the places where they did it.

In other words, everywhere.

But, John and Karen agree to talk it over before they decide to end or save their relationship.  Karen wants to know about the sex.  She fancies the excitement of the expressions of his specifics. (They are a little kinky.) He tells her the girl was great, a dancer, and wonderful in everyway.

“It was the best thing since Wicked” – John

It is Molly, a 21 year-old dancer, and cousin to Karen.

From here on out there is a lot of explaining to do.

Jaret Sacrey as Jeffrey is a little ineffectual.  There were quite a few laughs along the way but character’s choices needs work.  The character’s opening moments are weak and one is not sure poking the blow up palm tree is a good idea for establishing character. Here is a man, who weighed over 300 pounds, and even though he has lost most of the weight, he still thinks he can only get a woman by paying her an exorbitant amount of money. Also, he is an inventor so he should take extravagant pride in demonstrating his sexual products. Also, his neuroses should keep him in and out of the game all night long. Characters like this need to go to extremes to find the comedy.  One cannot play this guy straight. That is a death sentence and a sure bet for not getting laid.

Jessica Moreno as Julia has a very nice figure and gave a very nice performance.  Moreno’s entrance in the beach scene was magnificent.  And there are a lot of wonderful moments in her performance despite the dialogue she has to utter. (Would a woman with a Masters degree not know the difference between Katherine Hepburn and Audrey Hepburn?)  Also, it wouldn’t hurt to take this performance up a notch and make it a little more sexually physical to play off her partner’s neurosis.

Jeffrey Carmata as John is a comedian.  I did not get this at all.  So what do you do to make the character work?  Well as a comedian, he has a problem and his problem is women, lots of women. He is a sexaholic who loves veggie burritos and whiskey.  He also loves to talk a cozy tale to get women to make love to him. The problem with this character is that Carmata doesn’t understand the character’s complexities.  He doesn’t take delight in his precarious situations of getting two women to show up on the same night.   He doesn’t beg or grovel to bring his girl back.  And he doesn’t take absolute delight or shame in watching his young girlfriend dance.  One always hopes to find the character and plow full steam ahead in character choices.  Metaphorically he needs a mike, his arm draped across a mike stand, an eye for keen observations, and the ability to express those observations. Why stop at metaphorically, give him a mike and a stand and let him go at it. But, there’s not anything that can’t be tweaked and maybe that’s all that is needed. On the other hand Carmata has a very strong voice and I thought this was absolutely on the mark for a comedian.

Isidora Goreshter as Karen has a very good look and gave a delightful performance.  There was a problem with her opening entrance when she slammed the door and the photographs fell off the wall onto the floor. (It is an unfortunate thing when there is broken glass on the floor and no one knows what to do.)  As the photographer in the title, this character was not established as the photographer until much later in the scene.  Maybe she should have the camera ready the moment she walks through the door, and capture his cheating images in photographs.  Still, Goreshter had some very nice moments throughout the night and she is wonderful to watch. 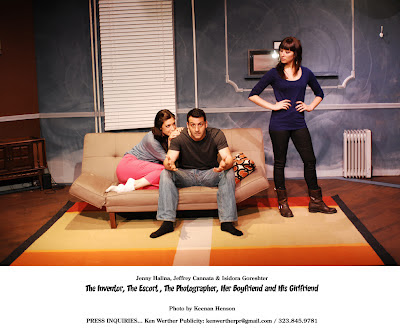 Jenni Halina as Molly understands her character.  She is delightful in the role but should express more of her love to her new boyfriend. Her interpretive dance on healthcare should get rid of the “much older cousin” and keep the man that is ultimately what she wants. More physical love and want would only add to this already fine character performance.

Matt Morillo has written and directed an interesting play.  There is stuff for everyone but mostly for the 20 to 30 year old crowds.  Those older see this play as an exercise in silliness. Which is not to say there is no room for this in theatre.  There is.  Also, it is very difficult for a writer to step aside and let the director do his work. Sometimes you just fall in love with the words that don’t give a realistic view of life, and which does not paint an accurate picture of an extraordinary day in the life of these characters.   At times the characters are so far away from each other, it doesn’t make sense.  This is a comedy about sex but there is very little foreplay in reaching the moments that matter. If it is about sex, let’s have a lot of foreplay, and put the fun back into this sexual comedy.

This cast is filled with gorgeous women and handsome men in various stages of undress and there’s nothing wrong with that.  But, character is critical in this type of show and character must be defined, must go to extremes, must have an insurmountable conflict, and lastly each character must know and realize their objective.  It’s a tall order to fill but when it’s done with conviction and heart, it is a beautiful thing.

Go and take a friend who loves foreplay.