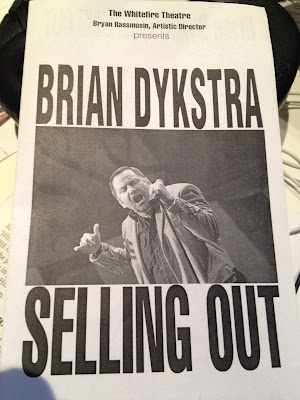 ‘You've got to say: 'I'm a human being, god-dammit! My life has value!' So I want you to get up now. I want all of you to get up out of your chairs. I want you to get up right now and go to the window. Open it, and stick your head out, and yell: 'I'm as mad as hell, and I'm not going to take this anymore!' – Howard Beale – Network by Paddy Chayefsky

“Did you really invite me to play Pet Rescue?” – Me

That’s never happened before – not on Facebook – a tempting message from a comment. I’m usually booked weeks in advance.

You know, if Bryan Rasmussen personally invites me to a show, I’m going to go. Only, if I’m not busy, booked, retained, engaged, taken, sick or dead.  And by the grace of the unknown, I happened to be free Friday night.

Not to mention – I love Rasmussen’s work. Firehouse by Pedro Antonio Garcia was incredible and I particularly like The Bellflower Sessions by Andy Bloch. Both are shows he masterfully directed.  (Search write-ups on this blog.)

In short, I didn’t know what to expect. I had not heard of Brian Dykstra, or of his work, but after Friday night’s performance, I can tell you this, I will never forget him.  This caustic gentle soul, makes his verbal point - hard and black, and spews forth the imaginary ink from his collective consciousness onto the fragments of paper that surrounds us like illusory floating post it notes around our very being – daring us to snatch the yellow impression, absorb it, take it to heart, and take action.

There’s a curious note in the program:

Many of the words have been worked out,
performed and developed with the help of
The Spoken Word Almanac Project
Darian Dauchan & The SWAP Poets
Mike Geffner & The Inspired Word
Special Shout out to THE BEATARDS

So I’m thinking I’m going to be looking at some kind of word slam  - Def Poetry if you will. And that’s okay with me.

And I am ready.

As I entered the theatre the backstage wall is draped with a Jasper John’s like tattered grey and white flag wonderfully designed by Maruti Evans.  Loud music is playing over the speakers, a long hard heart beat, what one would expect of a human exerting force, compliments of Don Tindall.  At right center is a small table littered with official like papers, a cup on top and a stool to the right. Downstage left center is another box with more papers, notes and a Starbucks like purple metal thermal flask of water.   Left center is a microphone. The stage is littered with thoughts on pages – meaningful passages, thousands of verses – accusations – damnations – and damn nice poetry.

“For God’s sake don’t quote the show – you’re never going to get the words right!” – me

No, just giving you a taste, a nibble, a morsel, tidbit, crumb, speck, and a mouth watering chew.

This show is about money and free speech, because lets face it if you don’t have money you ain’t got free speech.

Stick that on your holiday greeting card.

And then I hear something, interspersed between noisy highways of words; I hear complete silence – everyone is hanging on – clutching on this very ride, to every declaration. And there it is, he is, the poetry, the words, the ideal of words, the makeup of words, terrifying words that sends humans to prison, journalists to solitary confinement and or to their untimely death.  But that doesn’t concern Dykstra, he’s got to get the words out, we’ve got to hear it, and then we’ve got to stick our head out the window and declare: We’re mad a hell and we’re not going to take this anymore!

Or yell FIRE in a crowded theatre.

Dykstra opens up, lets it all spew, exorcising thoughts needed to get out, makes you feel guilty about banking at Chase and has you feeling sympathy for Somalia pirates (something I still can’t wrap my liberal mind around).  Still, his presentation was fluid, his movements precise, and his emotions real. Among all those notes littering the floor he knows exactly where to go, the page, the paragraph to make his point.  The amendment, the law, the vitae, the deceptions, and out and out lies presented to us everyday to representing the truth.  It is remarkable because he knows, on stage, exactly where to go to find a truth.  The one thing we can truly take away from all of this is:  We are a nation that has imperceptibly perfected the art of deception. And Dykstra implores us to wake the f**k up.

There were a few rough spots in this masterfully directed show by Margarett Perry. And Dykstra attributed the few miscues by lack of preview performances. (Keeping it very real.)

And the most amazing thing is having a partner, there with you on book, and willing to help in those moments that seem to stretch out ad infinitum. Still, all in all, a great show.  A great night.  And please catch it wherever and whenever you can.

Another part of this wonderful night is knowing the people you’ve worked with are there with you, supporting you, Tom Hanks, Christopher McDonald and Courtney B. Vance all supporting their fellow thespian in this small little theatre – The Whitefire on Ventura Boulevard.

What a night!  What a show!

Please forgive me for not including the marvelous crew!  (Why didn't anyone say anything?)