There was this moment when I absorbed an array of colors, a blast of an all-encompassing saturation that provided, a momentary, almost imperceptible warmth. I can’t remember the exact time or the place. But that experience has stayed with me.  And, I wondered if I would ever see, feel, or have that experience again?  - Narrator

The Chromolume has newer red seats, and was very warm inside. Very.

The heat concern was slight.  But it fit with the jazz theme – heat, jazz clubs, et al - bring in the smoke – stick colorful gels in the lights – show some sparkle, and make some noise.

You know, that deserves a, “Yeah”.

The patrons brought along their own body heat and smoke, and things got a little warmer on this full capacity night. Fanning with programs provided a welcome relief and some dry ice would have been downright “cool”.

Chromolume Theatre presents “Bird Lives!” written by Willard Manus and directed by Tommy Hicks through September 21, 2014. If you are so moved by the rashly scandalous life of the legendary Charlie “Bird” Parker and want to make this scene, please do. Oh yes, do.

Scratching a few items down and before they opened the door, a jazzy gentleman, wearing a black beret, ambled over to a piano bench and started playing. He was exceptional, and got us into a colorful jazzy mood. And that noise within me said, “Oh, that must be the piano player from the show and he has come to warm the lobby audience.”

They called for press and I maneuver sideways between the open crack of the theatre door and into the theatre.  I spied a piano on stage - upstage right - means something - we might have some music tonight.

But, quickly I learned the person, playing the piano in the lobby, was a theatre patron. That warm jazzy bebop feeling quickly fluttered away as we filled our seats into the state of darkness.

Okay, but then, through those speakers, I heard the sounds of Broadway show tunes. (The King and I - What gives, Moe?) There is a reason for this but, clearly, the music does not feed into the theme of the show.

Peering on stage now, (and I don’t mind Daniel Ingram’s minuscule set dressing) far upstage center is a curtain that, behind it, I imagined would be the flock of white patrons in the audience who have come to see Bird.  But, no, it didn’t open. And upstage right is that large upright piano that never gets used at all, not even as a prop.

Opening moments in plays are critical. And in those moments the actor did something - whether directed or not - in which a small part of the 50-seat audience let out an audible gasp.  This particular action stamped a brand of truth that had a profound effect in the beginning of the show.   And in those first inauthentic jiffies, well, the actor has to work that much harder to get the audience back into his corner. And he did. (More on this later.)

Parker was a man who, by all outside appearances, led a charmed life, just him, his horn, and a very warm smile. But, the façade, the shadowy vibration of pressing keys through the profound darkness on stage and making beautiful music, hid his unconquerable and obstinate addiction to heroin.  When you have that problem, other evils follow. 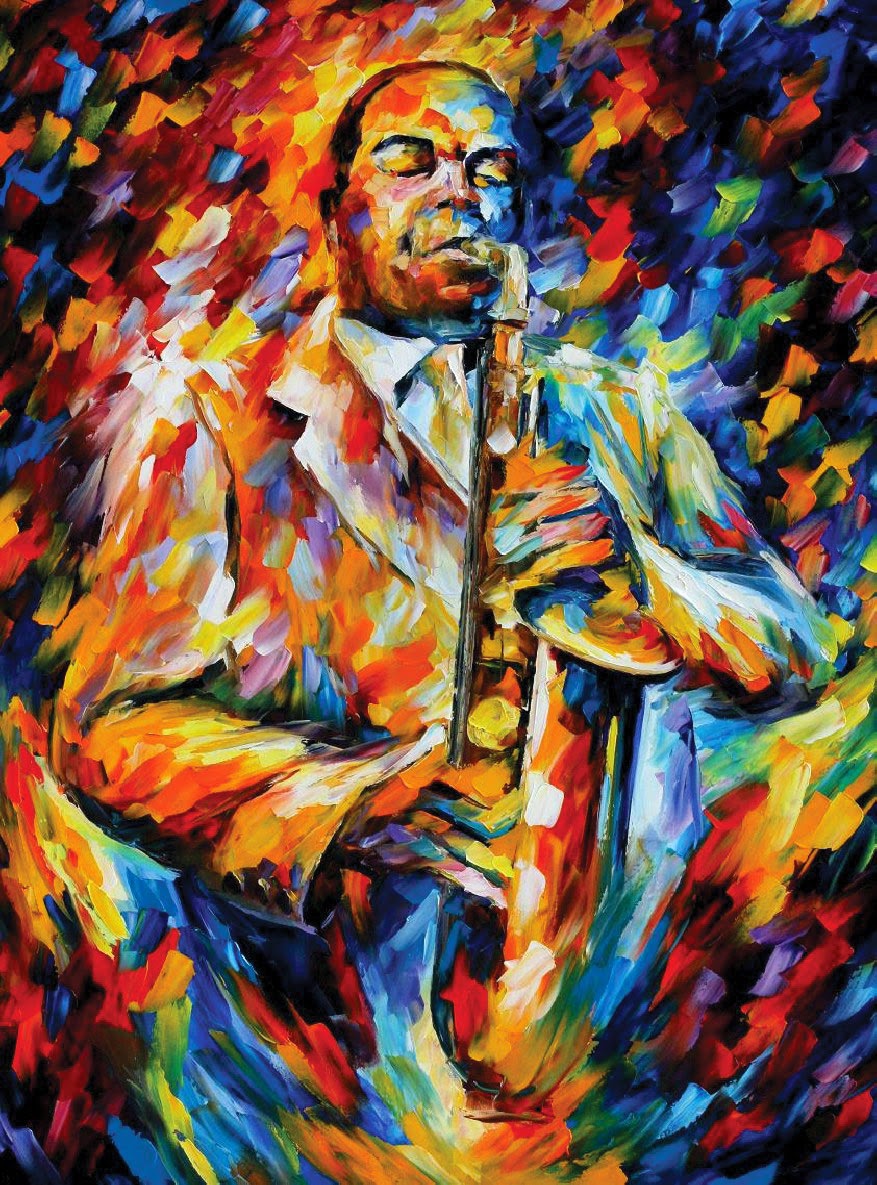 This is an obtuse question: Is jazz color?  I believe it is. And this production needs more color - visual, auditory, and emotional accouterments to give it spectacular colors like the painting on the program by the world-renowned artist Leonid Afremov.  Still, there are indeed lots to like about this one-man show that may have a home in venues all across the country.

“Bird Lives!” moving over from another venue across town, has the appearance of a work in progress and with that in mind, I will offer comments with the idea there is something here that just needs fine-tuning.

Tommy Hicks, the director, does a fine job. And like the mouthpiece in the sax, this production needed slight adjustments. Not sharp, not flat, but tuned to be the right note.

The opening when Charlie Parker is playing, it is obvious that he is not.  The music is coming from another directional source and so soft you would hear the keys rattling on the saxophone.  Hopefully this will have been corrected by the time you see this play. (Pad the keys, and stuff padding down the bell.  And, for the love of Charlie’s God, turn up the music.)

Also, this one-man show presents itself from 1934 to 1955 and we really never get or see how time marches on in this production.  Charlie’s character changes little from 1934 to 1955 and needs a dramatic physical change in appearance or manner.  Character development is critical here to get us to that end point. The end of his tortured life is projected here as subdued stoicism on stage, and the actions on stage belie a life that may have been one of excruciating dimensions.

Lighting Design by Samantha Marie would play an important part in this production but there is little variance other than lights up, lights down. (Theatrical candles could help with mood.) This show demands colorful lighting that puts pigment into Parker’s life, and dramatic hues during moments of supreme conflict.  The lighting for the Camarillo scene works effectively and we need more of this lighting.

Also, the music, Sound Design by James Esposito, must play a critical role in this play. We must see how Parker shaped the music from the life he led, to conflicts he survived.  The music must bleed from his experiences into the physical life on stage.

I’m not familiar with Montae Russell’s work as a performer but there was a lot here to enjoy. There is that “Bird” laugh that made you forgive his faults, and underneath shows the character’s burdens, and that works effectively.  Russell gives us a life of Bird living, not about his dying, and that is a fair choice.  But one wonders if there is another avenue of creativity to boost the levels of conflicts and struggles onstage.

The title of this play is “Bird Lives!”  Not to be a spoiler but, he dies. So, what lives? – his music and his legacy - So, the objective of the actor is to physically create the legacy - his music - through living his musical life to the fullest.  What is the conflict?  The most important is his heroine addiction and we never really see how that physically affects his life.  Drug addiction invites unwanted mannerism and must be present on stage, physically, emotionally, and sub textually defined. The addiction is the conflict and causes him problems with his wife, his daughter, his doctor, producer Norman Granz, and the police. And all of these minor obstructions contribute to the man and his music.  This is something we do not see.

Also, throughout the play, the music must be running through Charlie’s head, his fingertips moving, all as part of developing a character we can see on stage.  We need to see that life through his improvisational life. And it all must be in line, in tune, with the music.

There is a lot to enjoy from Willard Manus’s play.  It is Parker’s panoply of gifts to the known world. But it is also a collection of facts from his life, racial discrimination, addiction, home life, and playing the sax, rather than a complete story that drives home a point.  We learn about the Harlem Riots, the killing of his father, the shakedown from a police officer, but how does all of this make the character and move the life of the character?

Everything has to go right in order for a one-man show to be perfect.  We must believe the non-existent characters beyond the fourth wall, that they somehow hold the keys to Parker’s existence. And our solicitude must be genuine for the man and the colors he has created.

Thomas Bell plays Charlie Parker as well but did not perform on this night.

Amy Mazzaferro did a nice job with the Costume Design

Mike Abramson was responsible for Marketing.

Run!  And take someone who enjoys improvisation, in jazz and in life.