The Dickens You Say! A Christmas Carol – Conceived & Adapted by P.D. Soinski

I almost didn’t come to this show.

The description of ’57 Chevy” sounded too similar to Sal Lopez’s one-man show “This is a Man’s World.” The two shows take place during similar time frames and the setting of Sal’s show is down the street from the setting of “57 Chevy”.

So, we’re in the lobby at LATC a few weeks earlier, my partner said, “Why aren’t we seeing this?  You’ve got the tickets, right?”

At this point, I’m catching the serious stare.

“I’ll try for next weekend.” – Narrator

As the play starts, Cris Franco, Jr. (Ric Salinas) is in a Hollywood office.  The furniture is break room drab, and the view is less than inspiring surrounded by objects that arouse little creativity. (No one is credited for the Set Design in the program.)

And this could be the reason that Cris is having so many problems writing the simplest of sentences for his current project.  The wadded up papers, thrown in or around the trashcan, are signs of the vertiginous thoughts and of a highly inactive imagination.

So he just sits, stares, twists in his chair, and waits for a spark to drive his conceptual engine.

The spark, maybe that’s it, maybe there’s a story here.  A story that, at first, seems benign but a story that could grow into something substantial.  Rolling around the office on his chair, trying to get a firm grasp of his cerebral wheel, taking a breath and looking back at the imaginary stars, he rolls back in time, slowly recreating that which has not been created. 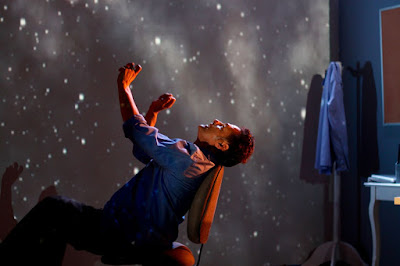 Cris back peddles his chair around the room, in an effort to jump-start his thinking.  Suddenly a door slams shut, a quiet sound envelops the cab until the key slips into the ignition, a heavy turn, the sound of a rumbling engine, and a modicum roar of contemplation as the fins and wings of open thoughts transport him into the distant past.

This is a story of an obsequious son, an observant author, now a man, who narrates the significant moments, dreams, and visions of his father.

The story begins with the purchase of a brand new 57 Chevy – and sitting, in the back seat of a car is a boy, wide-eyed, taking it all in trundling through memory highway.

The Latino Theater Company presents 57 Chevy, written by Cris Franco and directed by Valerie Dunlap, at the Los Angeles Theatre Center through December 20, 2015.

Cris Franco, Sr. was only four years old in Mexico when he got his first job, painting faces on plastic toy soldiers. This was part of the family lore, a story that never goes away when the topic of hard workingmen are spoken. Yes, lore is all in the telling.

And adding color commentary to his story is a very important woman, Didi Barnes, who, on this day, visits their home in South Central Los Angeles.

Ahh!  Didi’s grabs her Lucky Strikes, gathers the kids around the floor, and recounts in her broken Spanglish the story of being caught in the Mexico desert with a busted car, “el caro, no go oh”.  Stuck there with no one to help until “your Papa” drove by and offered assistance. Didi is so grateful she gave Cris, Sr. the name of someone in the USA who needed help repairing automobiles.

And so Cris, Sr. found his way to El Norte, and worked at Felix Chevrolet at Figueroa & Jefferson in Los Angeles, California.

Back home in Mexico, his wife had another baby, Cris, Jr.   But Cris, Sr. couldn’t go back, needing to stay in the United States because of work.

And in the following year, Cris saved $1,802 for a beautiful new 57 Chevy, chrome and wings included.  The car was the one thing that represented the idea of being an American, a brand spanking new American car, for a big American family.

But, in order for Cris to realize his dream of an American family, he had to get them from Mexico. The long arduous journey requires meticulous planning and staying awake. So he concocts a formula for staying conscious on the long trip, the “magic no-sleep recipe” of drinking coffee and eating chilies.

Bringing everyone back into the United States proved to be slightly problematic. Particularly when a border patrol agent didn’t believe they were entering through the Bracero Program.  But the guard admired his 57 Chevy, and with the admiration dripping, like water out of a tailpipe, the agent lets them proceed.

And away they went to their home in the culturally diverse South Central Los Angeles where it was Dad’s dream for his son to become a doctor.  Unfortunately, things did not turn out as Dad had anticipated.

And when Dad decided to move the family out of South Central to the San Fernando Valley, he loaded up the 57 Chevy, and made things a little more interesting for everyone.

One-man shows are difficult to perform successfully.  Ric Salinas inhabits a myriad of characters while playing one character, Cris Franco, Jr. There are no actors to play off of, and there is no one to relate to with the exception of the audience.

But, Salinas is a master chameleon and is able to give creative life to all of the very different characters – the father, Didi Barnes, the daughter, Father John O’ Sullivan, and the mother—Raquel. The sisters, Luisa, Marta, Maria and Raquel, are all there in various forms. At times, the roles come out in small vignettes, rather than a collection as a whole.  This is from the remembrances and imagination of the main character, the son, Cris, Jr. And for the most part, we see the characters through the eyes of the son. Salinas could go even farther explaining what happened, before his eyes, with each individual character.

Valerie Dunlap, the director, has Salinas moving the set pieces, not out of imagination and not through the eyes of the character, but through practicality.  The imagination and life of the character should be enough to move the set pieces.  And we have to find a way to see the events played out before Cris, Jr.’s eyes, that these events could be better defined in the way he deals with his father, the car, the Mother at the door on Halloween, and the “bumper stickie” event with the oldest daughter.

Cris Franco, the writer, is a funny playwright.  He was present at the performance that I attended. And I immediately knew it was him because he ran from person to person, hugging and kissing everyone.  The real giveaway was the 57 Chevy model he was holding in his hands.

If I had a criticism of the play, it’s that we lose sight of the 57 Chevy from time to time.  The story is best suited when the life is about, or around the automobile, in every manner, and in every moment on stage.  (Is it possible to have a model car in the office?)  Also, if there is something that should be added, in feel and characterization, is the boy’s want of the car. Want helps the character with his objective and helps in creating a dramatic conflict in the play. (Also, somewhere in this play Cris Franco, Jr. should describe the car in loving detail giving color to his memory. This play needs the bright vibrant colors of Mexico.)  Yes, the father loves the car, takes great care of it, it is in pristine condition, and the son should have those same feelings, so that when the ends comes, we feel more for each character, the father, the son, the mother, and the sisters.

Lastly, one couldn’t ask for a better tribute than to have a play written honoring a man with a dream, a vision, and a strong work ethic.   This is the story of an American Dream seen through the eyes of an admiring son.  Certainly, and on this night in particular, one could not have asked for a better honor to Cris Franco, Sr., than having his entire family—wife, son, and daughters—on stage, and on this night paying homage to a man who lived the American dream.

Run! Run! And take your father or a mentor.

Somewhere, and in a my imagination, there is a prodigious pristine chrome stature of a working Dad hunched over an automobile, a wrench in one hand, and a book of dreams in the other.