Next to Normal – Music by Tom Kitt, Book & Lyrics by Brian Yorkey 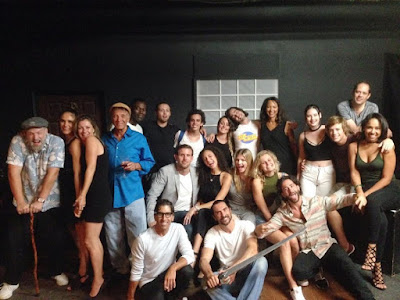 The Pan Andreas is a quaint little black box theatre that sits behind a restaurant in Hollywood.  The grit from the traffic on Melrose and Wilton lingers and the people on this particular night represented a large swath of theatregoers from the ever increasing cosmopolis of Hollywood and Los Angeles.

Outside on the patio, patrons waited in the humid air while sitting on park benches. An old motorcycle was for sale.  Three unruly types were conversing in a laden language filled with profanity, mostly about women who had done them wrong, guzzling one beer to the next, leaning back their heads to capture the full throttle of the bottle.  The cars in the parking lot were placed there just for leaning manly accouterment.

On this hot night, women came dressed in slinky, theatre-going apparel, with long legs and high heels to match. Some came to meet others; hugs were exchanged, long laborious passionate hugs. This was about as diverse a group of patrons as I have ever seen, young, old, black, brown, poor and rich.  No, I take that back, all rich in humanity.

Five dollars a ticket was heavenly.

But this night longed for passion! Passion for the work, and passion in the observation. That’s what we came for and that’s what we got. – Narrator.

Actors should work on their craft in whatever venue possible.  For some, it’s almost impossible to land a role in a 99-seat theatre, given time constraints and the other intangibles.

And Actors Equity Association is trying to do away with the 99 seat venue altogether. It might all come down to this.

So, the next best thing to do is perform a vignette with the idea of getting the work done, improving the craft, and getting the work seen.  The topping is having a live audience, the feedback that one gets with audience to test the art and the craft. The theatre was packed.

The credits were sparse – budgetary constraints – allowing only the titles, and the actor’s names, but not their character’s name or even giving the writers credit.  Perhaps it is something they want in include the next go round. Also there was little to be had in the way of props and set design, a bar, a box, some glasses, rose color water, and your imagination.

Jay Duncan plays Henry Hackamore, a Howard Hughes character that is dying, going over to the other side, but needing to accomplish one more thing before he shakes off his mortal coil.  One is convincing the ravishing Luna, Ashley Stiles, to give him sex before he drops dead. Right now he has one foot in the grave and is waiting for the final stimulus to pull or push him into heavenly pursuits.

Luna, is more than willing to provide that service for the price.  She has taken Harry’s jet in.  Henry Hackamore asks if she wants the jet.  She doesn’t.  Scruples.

But there’s a problem with Henry Hackamore.  He hasn’t had sex, well, at least with a woman, in many years and this is something he has to experience once more before he departs these earthly plains.

While the makeup and mannerism of old age worked well for Jay Duncan, one would have preferred a role nearer to his age to witness the scale or a scope of his acting abilities.  Funny thing though – an older man hitting the floor as he does would not have survived the fall.

Ashleys Stiles does a fine job and is very sexy on stage.

Eskimo Girl – No author given.

Ashley Liai Coffee, woman, has just awakened after a brief roll in the hay with a soldier, Teroon Kibwe.  The soldier, with his bestial affinities, thinks too much of himself as he believes he has just laid a virgin. But she critiques him that he was too fast and gives the appearance that this was not her first time. I’m not sure how the soldier was mistaken, possibly one of those dark Alaskan nights.

The woman wants more and uses her knife to get it.

More time is needed to construct and define the characters, especially the soldier, the uniform, and also to define the relationship that keeps them together, in this time and space. That aside, both actors have a very nice look.

Traces of Memory – No author given.

Laura Candioti and Gabriela Micalizaz star in this piece about two misfits, one more of a misfit than the other. The problem is defining who is the worse, the one with the knife or the one who has just killed her family.

“Nobody burns up their kids and dog.”

Credit must be given to Gaby Micalizzi and her use of a knife.  That aside, one would like to see Micalizzi performing scenes from the screenwriter Ruth Prawer Jhabvala. Micalizzi has a terrific look for this type of work and is mesmerizing on stage.

Laura Candioti has a few moments to shine in this scene.

The Crucible – by Arthur Miller

“I saw your face when she put me out, and you loved me then and you do now!” – Abigail

Barrigas has a commanding presence on stage, releasing his passion in small increments. Rush presents an interesting foil, slightly quirky and offbeat that given time and nuance would add an extra layer to the character. Rush is appealing – squared jaw – and resolved.

Lie of the Mind by Sam Shepard

Kritanya Hartunian and Sara Drust tackle Sam Shepard in Lie of the Mind.  Southern accents were nice in this scene but the wig and the blackened teeth did not work effectively especially for a visually stunning Hartunian and an equally appealing Sara Drust.

Hartunian was wheeled on stage and the scene was about a mother and a daughter (in-law?) and a murder that took place. The conflict should be apparent the moment she is wheeled on stage; the relationship needed work and would probably worked better if a smaller part of the scene was defined and refined. In any case, one would love to see both of them again playing to their strengths.

The Dreamers Examines His Pillows – by John Patrick Shanley

Carlos Joseph Echeviarria looks nothing like his picture but he is completely commanding in the role of Dad.  Andre Matarazzo (Tommy) looks exactly like his picture and has a created a quirky character that sounds like he is from New York’s Lower Eastside despite being from Brazil.

Dad has lived this life and wants to get Tommy, his daughter’s lover, onto the right track.  Tommy, a woolgatherer, was dating Donna and now he is moving on to the 16-year-old sister, Mona (not seen).  One is not sure what the scene was about, other than an older man providing life lessons to a younger one but it has to be more than that, and must be filled with creative choices and nagging conflict.   Tommy is a thief and a liar and seems to be losing his mind; all things that Matarazzo can add to this scene.

Echeviarria has charisma and strength in this scene that carries the weight of an experienced actor. Terrific work.

“I flirt therefore I am.”

Billie (Veronica Ocasio) and Rhonda Louise (Elena Ghenoiu) are beautiful women who danced their way into this scene.  The actors bring a tremendous energy to the moments; still they need to find the conflict that defines the play. Not only that, Shanley provides information about the characters: “Gerry leaving”, “husband off building buildings somewhere”, “I’m dressed up because you wanted me dressed up”, but the women never catch on or come to the realization as to why they are there on this particular night. There’s more to be had than the elegiac gurgling of two lonely women sans men in Manhattan. Oh, but they were stunning.

The Family of Mann – by Theresa Rebeck

Belinda (Sally Rae Hamer) and Ren (Bryan Zampella) play a hapless couple that is destroyed by a Hollywood television sitcom she wrote but has now been thrown off the show.  She sits on the couch drinking a bottle of champagne when Ren comes in, all smiles and giggles, because now he is the producer of the show.

Ren says he thinks he is falling in love with her and Belinda talks about going to the La Brea Tar Pits and feeling like the mother mastodon sinking into the pit.

Hollywood ain’t a pretty business. Hollywood is a high stakes game and characters need to take those characters to the extreme to get what they want, and they must want it badly.  There is more at stake here, more conflict to be realized.

Betrayed by Everyone – by Kenneth Lonigan

Jaq Mackenzie and Evan Grayson play characters who are at the low points of their lives.  They are on drugs and living in a crack house.

“Where is everyone?” – Woman

The man, dazed and confused, listens to a woman’s story about a bus driver who waves at her and doesn’t notice the girl that he runs over because he was distracted, waving.  This was possibly the reason the woman is now in the crack house struggling how to forget and to move on with her life. Finding her answers to move on is what she needs from this character.

Carl (John Reno), an aging independent movie star, makes a grand entrance into a hotel room, wearing a skimpy robe, sparsely tied, in blue briefs, pouring himself a drink and walking into the room where Nick Machado sits on a bed watching Carl’s movie, in a scene he’s seen hundreds of times because he wants to talk about it.

Carl has other things on his mind namely the young manly construction worker’s body in front of him.  But, the younger man seems oblivious to it all.  He sits and talks about the scene on the T.V. while Carl is chomping at the bit.

Carl, sensing his vacuous stare, moves on to another ploy – working on his movie scene. The one line the construction worker has that ends with a smirk.

The younger man’s avoidance does not play too well in this scene when the inner emotional conflict could spear him on to bigger and better things.  We find out later that he has a wife and a little girl at home but somehow we should know that at the beginning, as part of his non-verbal historical backstory.

Reno’s physical life is impressive as he moves into the direction of the conquest and is looking to add one more notch on his skimpy bathrobe tie.

Conquistador – No Author Given

A woman (Kelly Park) has a fantasy about a conquistador (Koko Nollasco) and there she has a good physical life on stage.  But one has no clue as to what was happening. The woman has a fantasy life but there was little in the way of conflict or even a relationship with her partner, the conquistador, in his underwear, holding a sword and swinging it around. The scene should not be a matter of abstruse speculations but broken down to the simplest of forms for us to get a better understanding.

Overall I had a grand time and nothing but respect for Sal Landi’s directorial spirit - working with actors who are passionate about the craft. It is the passion for this type of work that eventually fulfills dreams big or small.

But, and this is the last note I will give: On this particular night, for some actors, the low theatrical voices were drowned out by the sound of silence from this very receptive audience.