The Consul, The Tramp and America’s Sweetheart by John Morogiello 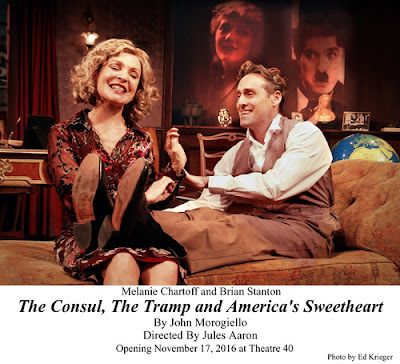 Despite all conflicts, films manage to get made – providing the principals want it made – but the making of each film, a collaborative endeavor, is usually a life and death struggle with death being the operative word. – Narrator

John Morogiello has written a wonderful play that explores a myriad of social, political, and economical issues and does so in dramatic style. His dialogue is taut, specific, and leading in a way in which a play must progress.   Without giving anything away of this 90-minute drama, a character caves into the demands of an economic and political nature, and then takes it one horrifying step further.

Theatre 40 of Beverly Hills presents the West Coast Premiere of The Consul, The Tramp and America’s Sweetheart by John Morogiello and directed by Jules Aaron is brilliantly executed, and elegantly produced by David Hunt Stafford and unfortunately it has closed.

As a theatregoer, one can see the similarities between the characters in this play and the political theatre presently being enacted in Washington DC.

In short, the play explores the realities of allowing politics to censor a work of art, and in this case, allowing a Nazi to goosestep his way into a 1939 United Artist lot.

In real life, Georg Gyssling (Shawn Savage) was a former athlete (member of the bobsledding team in the 1932 Lake Placid Winter Olympics), a member of the Nazi party and part of Hitler’s Hollywood consul, and a man who persuaded Hollywood not to make pictures that criticized Hitler and Nazi Germany. Whether he had any influence is questionable (probably not as much as the Motion Picture Production Code) but on this day and in this play, he was tenacious in his objective.

The color brown prevails in the set (Jeff G. Rack, Set Designer) and the costumes (Michéle Young, Costume Designer) are a gloomy reminder of the Brown Shirts that played a role in Hitler’s rise to power. Whether this was intentional or not remains to be seen.

The Consul, The Tramp and American’s Sweetheart is told from the perspective of an older woman, a personal secretary who, tragically, who looks back on her adventure with fondness. And yet it is Miss Hollombe’s (Laura Lee Walsh) story from which this story emanates.  Hollombe paints the picture in the fashion she desires.

Today Gyssling, in a nice brown suite, is a nuisance.  He is an Anglo European, a German behemoth with slicked back hair who has the appearance of an athlete out of a Leni Riefenstahl film, Olympia to be precise. Currently in Miss Hollombe’s office, he is a sty in the eye of the personal secretary, with his intrinsically cruel German accent, in a  provocative manner of asking questions without any sense of delicacy. 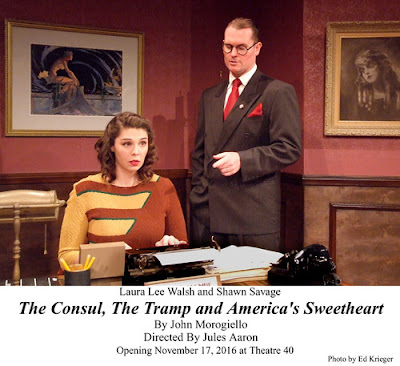 Gyssling insists on seeing Mary Pickford (Melanie Chartoff) and he will not leave until Pickford leaves her office.

“So I understand. Are you letting her out?” – Gyssling

Gyssling, breathing down Hollombe’s neck, has a slight change of tactic. He asks her the origin of her name, whether she is Christian, is a question that inflames his party’s rhetoric – a line of religious hatred. The act is both disruptive and unsettling.  Hollombe moves to complete her office duty tasks without answering the question.

But, all in all, Miss Hollombe is not having any luck getting rid of Gyssling, if that is her objective.   In fact, he is making her nervous as she tries to type and, at the rate she is going, her words per minute is a minus one.  (How did she get this job?)

Frustrated beyond comprehension, Hollombe dials Pickford who, up until this time, has not moved a muscle, quiet as a mouse, as she listened through the walls.  Pickford picks up the phone and says she is busy.

“Do your job.  He can’t stay here forever.  Even Nazis get hungry sometime.” – Pickford

Pickford, peeks out of her office door, and wastes little time in trying to dismiss Gyssling by saying that it’s Friday before Labor Day weekend. But, Gyssling stops her with a threat.

“You realize this decision could affect the distribution of all films produced by United Artists in Europe’s second largest market for American cinema.” - Gyssling

Pickford acquiesces.  Still, her altruistic impulses kick into high gear as she invites Gyssling into her office.  She tells Hollombe to interrupt her as much as possible as she slips the door closed.

Gyssling is effusive, telling Pickford that he has admired her films but Pickford is a businesswoman and wants him to get right to the point.

“You’re threatening to withhold my studio’s films from the German market unless I do what you want. – Pickford

“Not a threat, dear me, no.  You shouldn’t feel threatened.  I merely ask that Americans be aware of what the German people find acceptable and unacceptable in a motion picture.” – Gyssling

Pickford knows that Gyssling is up to something, and has something on the studio.  And she is right, as Gyssling wants to know more about the next Charlie Chaplin (Brian Stanton) movie. Gyssling says Chaplin is doing a film about Hitler.  It’s in the trades.  Alarmed Pickford asks Miss Hollenby to ask Chaplin to come to her office.

Gyssling leaves and Chaplin charms everyone by just stepping into the room. Pickford works her magic to get the answers from Chaplin and his answer are not entirely forthcoming.

But, once Pickford finds out about Chaplin’s next film (The Great Dictator), she must make a decision about whether to green light the movie. She does so by calling D.W. Griffin (He says, “No.”) and then calling Douglas Fairbanks the other owners of the studio.  She also says she has a fiduciary duty to the shareholders.

Jules Aaron, the director, does a fantastic job with this play including throwing Keystone antics of Chaplin as part of the makeup of the play when Gyssling and Chaplin fight. It is brilliantly staged and wonderfully unexpected.  That also holds true for the quiet moments caught on stage that was also exceptional.  The action, moving in and out of Miss Hollenbe speaking to the fourth wall with the lighting and the characters freezing, worked brilliantly (Lighting Design by Ric Zimmerman.) Without getting into details “the decision” worked less effectively.  Chaplin has worked years in pre-production to have this decision come down on him and the audience must really see the emotions coming from him. The same holds true for Hollombe who has worked her entire young life to get to this position. Also, Chaplin and Pickford have owned the studio for 20 years leading up to this moment.  What must this say about someone’s true colors once the decision has been made? And, how does this change their relationship forever?

Melanie Chartoff is superb as Mary Pickford, Canadian born and America’s Sweetheart.   Chartoff brings the right amount humor to the character, which longs to be in front of the camera again, but is resigned to running a studio. Chartoff brings enough of the backstory to be totally immersed in the daily life of a movie mogul.  Chartoff is smooth and unpredictable down to the last capricious moment.

Shawn Savage is also outstanding as George Gyssling, a man of unyielding rigidity with the weight of a political power behind him.  A man who believes he can come in and proscribe a dictum - that will have a movie studio bow to his political demands. Savage, complete with German accent, is excellent in the role and the fight scene was excellent.

Charlie Chaplin, wonderfully played by Brian Stanton, is at the top of his game and Stanton plays him as such.  Stanton brings an excellent physical life to the character that practically dances on and off the stage.  The scene with the globe worked to perfection on this night and Stanton shows us a life of a man who must have been a complete physical specimen.  Chaplin is the one character of this show that stands by his values no matter the cost going so far as to not answer the question of his religious makeup. Still, at times Stanton requires a deeper emotional life in Chaplin, one that will show us his humble beginnings when things get really tough in the trenches.

The one character I found problematic was that of Hollombe, a character resembling Mary Wickes, with a loud, lanky, and wisecracking persona. This is Hollombe’s story, however articulate she wants to make it.  Hollombe is on her second day at the office with no visible reason for being there.  She doesn’t know how to type.  She’s hired by the most successful woman ever to run a studio, and can’t find anything to do, except to eat popcorn and listen to the conversation through the office walls. To round out the character, the relationship to Pickford must be unusual, pragmatic, and unique. This character should have more on the ball, should be extremely intelligent, and should be able to multitask any time at any given moment and in any given circumstance. Hollombe’s focus is disoriented with problems involving her boyfriend who has found a job in New York. Laura Lee Walsh’s unconquerable obstinate choices require strength and, at times, she must lift her way from the wallflower status while the other three are on stage. Being young and inexperienced should not hinder this character.  Hollombe had neither the beauty nor the talent to justify the position and the relationship with her employer necessitates further exploration by the actor.  That said Walsh did some very nice things but needs to add to her performance.

Other members of the remarkable crew are as follows:

If you have a chance to see this play in another carnation, Run! Run! Run! And take someone who has a gritty side to their political leanings.