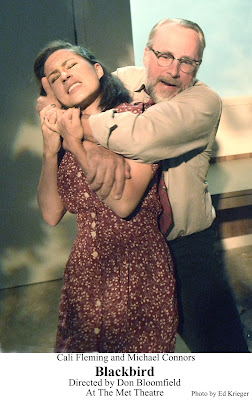 Blackbird by David Harrower and directed by Don Bloomfield now playing at The MET Theatre starts with a severe sense of dread and never lets up.  Blackbird is a taut and horrifying experience that will have the theatregoer’s mind racing with visions and thought provoking questions days after viewing.

In short, Blackbird is a wonderful theatrical experience with performances that will leave you breathless.  This is a show not to miss.  Again, do not miss this show! There are brilliant performances all around. Don Bloomfield’s direction is superb, engagingly gratifying, and filled with so much emotional backstory that it is hard not to turn away for one, lasting, second.

The theatrical night begins with the entrance into the MET Theater. Audience members walk through the set of discarded trash and littered paper wrappings to get to the seats.  Turning around, after being seated, one notices an office lunchroom. My first thought, because of the mess, was that is was the back room of an auto supply store. Later, we learn it is a company that manufactures dental and pharmaceutical products.

Notwithstanding, the room is unkempt; a plastic bottle is plunged in a Cup of Noodles, and an empty salad container sits on a table center stage.  Two plastic chairs, perhaps found in an alleyway of discarded items, conflict with a lunch table that has room for one, uncomfortably.

A larger table stretches upstage below two frosted windows, where visible ghost like shadows pass back and forth in anxious shades.   Cheezy crackers adorn that table along with an assortment of plastic bottles, boxes and cans. A lunchroom clock above the door is permanently stopped at 12:00 noon.

Used lockers are stage left against the wall and next to that are nine white storage boxes of materials, one imagines, of files ready to be audited or subpoenaed.

Against the wall, stage right, are two curious instructive notes “Trash Here Peter”, and “Let’s be Green! Recycle in Green Bins Peter”, above the trash bins. (Peter is still mindfully distracted.) Along side of the bins are a working sink, a microwave, a plastic drip water bottle and cheese puffs on the top shelf. (Beautifully set with no credit for Set Designer.)

The dirty lunchroom reeks with employee complacency and of lives not bothered with peripheral cleanliness or tidiness. It is a wonderful image of the cluttered lives we are about to encounter.  It conveys the metaphorical images David Harrower had in mind when he wrote this play.

Blackbird does not have an intermission. The only way out is the office door on the set, so we are all captured, for the time being, a fly on the fourth wall to intrude into these desperate lives until a final truth is divulged, and it is a ghastly one.

Ray (Michael Connors) escorts, actually hides, Una (Cali Fleming) from his co-workers directly into the lunchroom.  The emotional shock is quickly highlighted.  Ray’s face has drained of color while Una just stares at this man.  A translucent wall elevates, and one so thick, no one knows what to say. They are quiet pillars, beings of unintelligent thoughts, hoping to gather their wits about them in confrontation.

This meeting is disturbing, filled with raw tension, emotional hurt. And when they communicate what comes out are short speaks, implications, from the past, to the immediate, and into the future.

Ray, knowing who she it, is momentarily unwilling to come to terms with the reality.

Ray, in his mid fifties, salt and pepper hair, and hiding behind spectacles and a goatee says he’s got a lot of work to do.  But Una, 27, in a pretty red summer dress, is not going anywhere.  She has driven seven hours to see him – last seeing him fifteen years ago when she was twelve. She asks him if the other employees will all go home so that they can talk. But talk about what?  Settle what?

“How many other twelve-year-olds have you had sex with?” – Una

Una’s plan to catch him unaware works.  She finds out that he doesn’t go by the name of Ray anymore. Now Ray has little chance to make things up and as the night wears on Ray finds himself in more trouble than he bargained for. 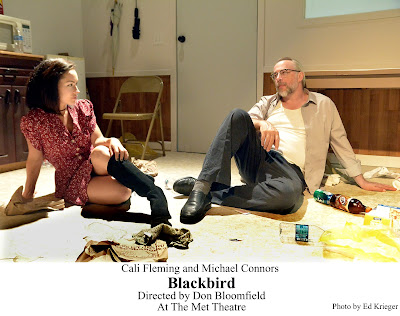 Michael Connors is superb as Ray. Connors gives us a three-dimensional character with an incredible backstory as he manipulates the life that was once called Ray.  Ray is not altogether truthful mostly because of what he doesn’t say. And yet, Ray is fighting for his life, his job, and his family in his version of the truth that lacks credulity.   These actions are clearly visible in Connors’ exceptional performance.  Whatever you believe about the character, his sincerity, his truths, Connors gives Ray a tremendous truth and this is a performance not to be missed.

Cali Fleming has a sultry indigenous look that plays well with the character, Una.  Underneath, one cannot tell what she is thinking, what she wants, and how she manages to go about getting it. But her presence is one that is terrifying because her history is ineradicable, and her route of justice is circuitous. Underneath she is simmering in a quiet rage, about the misdeeds done to her long ago that destroyed herself and her family. There is something mysterious about her track of execution, what she knows in her heart of hearts, that she seeks and finds out.  Fleming’s performance, backstory and all, is marvelous.   Her actions highlight a strong mental connection and her craft is impressively solid.

Don Bloomfield, the director, sets the bar high with this type of acting. It is a monster of a show that manages to deliver an emotional punch and a defined backstory.  This method of work suggests a rigorous dose of improvisation and one that forms a strong connection between the lives of the characters on stage.

Bloomfield direction suggests we choose sides quickly in the initial meeting. Una comes in with the moral authority on her side and we learn that Ray has paid the price for his crime.  But there is something deeper and darker here – the reason this meeting is taking place – and the reasons why Peter is mindfully distracted. Bloomfield doesn’t let it all go, not right away, or maybe not ever.  He leaves a healthy dose of ambiguity in this production so the theatergoer can run with this and tell their friends.

If there is one quibble, one quibbles this: Una gives an emotional speech with the lights completely dimmed on everything but her.  It is a very visual description that requires, or almost begs a necessary response or action from Ray.  One wonders how dimming the lights progresses the relationship and moves that relationship to its final conclusion.

David Harrower, the playwright, is from Edinburgh Scotland.  His bio was inadvertently left out of the program. Blackbird was produced by the Rogue Machine in Los Angeles in 2011 and won a LA Drama Critics Circle Award for Best Writing. In style, Blackbird is poetic, an exceptional work of art, and the reasons we need intimate theatre.

Other members of this remarkable crew are as follows:

Run! Run! Run!  And take an actor, someone who enjoys the execution of great theatre. You’ll have much to talk about on the way home.

Blackbird is a production of A DBA Studio at The Met Theatre and runs through October 22, 2017.