Theatre is a business.  That’s plain and simple.  The idea is to be seen and connect to an audience.  If there is no one in the audience, with the exception of the two reviewers and their dates, has everyone done their job?

Phillip Sokoloff (publicist) got the reviewers in and, at least for this night, that job was accomplished. Ed Krieger, the photographer, did his job.

Jane Edwina Seymour curated, produced and directed the monologues.  That, in and of itself, was an accomplishment.

But, what about an audience? Unless every actor is new in town, has no friends or acquaintances, or everyone they know has suddenly gotten the plague, there is no excuse for each actor not to have two or three “friends” filling up the seats. Eight scenes, eight actors, mean that there should be 24 patrons in the audience at the very least, every night, that is if they want to be seen.

Inviting no one, on a Saturday night, is an exercise in futility for the actor.  Not blaming anyone but one part of this endeavor, this job, is for the actor to be seen, to get people into the theatre, because in reality, no matter the venue, actors need an audience to find a connection, to give, and to get feedback.

For the most part, the monologues are about travel, which interested me having traveled across the country twice in my youth.  But some were not and that was rather odd, or maybe it was the travels in their lives.   The actors’ character names were also not in the program, and that was odd as well.

The play, on this night, starts with a woman reminiscing with travel slides projected on a small screen far upstage left.  But the slides on a carousel were too small to make out, other than each travel photo is in a different time and place. It must have been part of the show because the “old skool” projector screen got a credit in the program. The projector and screen left when Jane Edwina Seymour presented the night. 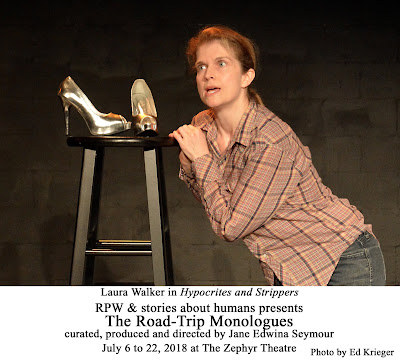 Laura Walker (actor) is thrown out by her live-in stripper girlfriend, shoes and all, and, with nothing but her car, decides to travel across the country to start anew, only to end up with another self-infatuated stripper who takes pleasures in self-gratification in Los Angeles.  Walker's focus should be on the character. The character doesn’t seem too bright and we need to see how that trait always gets her into trouble.   Also, in terms of character development, the best thing she could have done was to wear the shoes thrown at her and then play out the scene.  (Or, at least, do it in rehearsal to figure more about both of those characters.) Also, the whys of how she gets pulled into these relationship must be explored. Walker should also relax. Most of her action was pushed, hard, leaving little room for character exploration and development.  We get that she is mad (angry facial expressions) but we don’t see what is carrying her to her objective, whatever that objective was.

There are some interesting things in Yaged’s writing and they are mostly about relationships and what people expect when engaged in relationships. 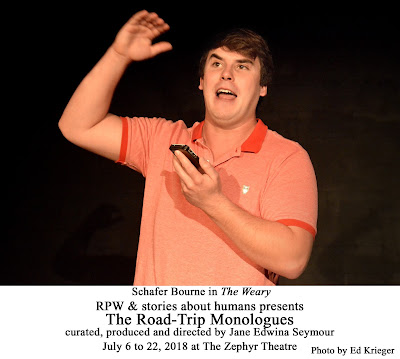 Schafer Bourne (actor) brings in a Coke, a 20 oz. coffee container, and a bottle of Evan Williams Whiskey.  (Funny, with all those props, he never mixes the drink. Probably best to use it or discard it if it is not useful in the scene.) He takes a few drinks from the whiskey bottle, calls his friend (or brother) Mikey, and leaves a very long message about the trip they took with his or their father long ago when they were nine.   He asks Mikey why he hasn’t called and that is never resolved during the course of the monologue.  A bit farouche he never manages to express what is truly on his mind. Bourne brings enough of his natural self onto the stage but he really should decide about his objective and where the monologue is taking him. Defining the relationship is critical in determining where the character is going.

It seems like there is something missing in Michael G. Hilton’s work mostly having to do with the relationship between the character on stage and Mikey, why they fell apart, and why they don’t see each other anymore. 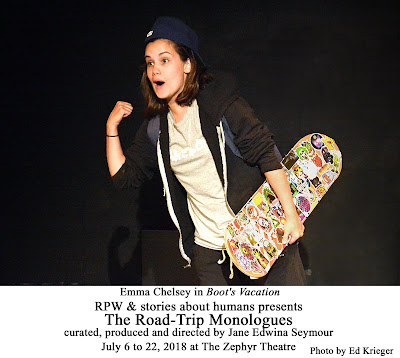 Emma Chelsey plays Boots, a skateboarder, and makes an unforgivable mistake in her entrance onto the stage.  She doesn’t skateboard on stage, she doesn’t show us what she can do, and that is absolutely essential for us to see.  It is a defined truth that gives life to all she speaks about on stage.  Also, everything is described in degrees, and slopes, until the character reaches the Guggenheim museum when things didn’t necessarily change in the mind of the character.  But the Guggenheim museum appears to be the answer, the eye-opening moment, where children put away their toys.

Rex McGregor gives us some interesting moments about a person growing up and understanding there is more to life than skateboarding across the world. 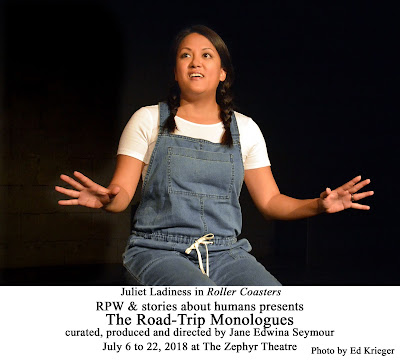 This is a story about a woman, Juliet Ladines (actor), whose childhood abruptly ended after the divorce of her parents.  Her dad was cheating on her mom and her mom was involved with another woman. Ladines is sensible in her approach to the role but more is needed in character to define the character and her objective.

Lesley Asistio has written a monologue with characters that are clearly defined in the mind of the character, the cheating father, the lesbian mother, the girl who wakes up in adolescence to discover things are different in the world she now observes. 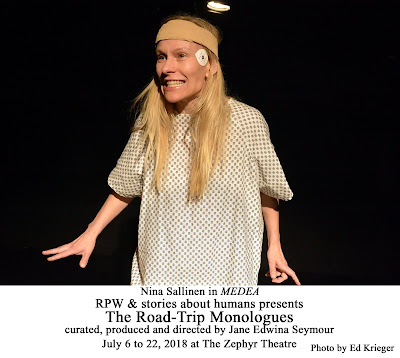 Medea (Nina Sallinen) has committed four homicides, including her kids, and is certifiably nuts.  Not sure what this has to do with traveling. More character work is needed to convince us she is in a medical lockup situation and, even though she is nuts, she needs a stronger creative choice to carry her objective.

One did not get Chas Belov’s story, or where it was going.  There must be a reason the character is telling us the story but at the end of it, what does the character learn? 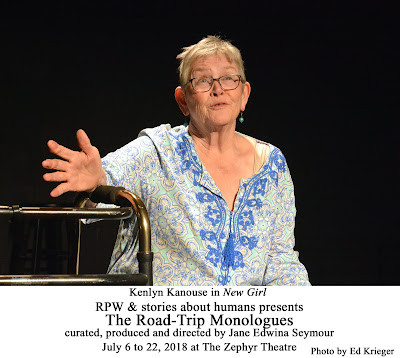 This is a story about a woman (Kenlyn Kanouse) who has escaped a Nazi concentration camp and is mentoring another woman who may not be right for her grandson.  The road she has traveled has been difficult and one supposes she is preparing the “new girl” and her difficult road ahead.  The character needs an objective and a life with exigency for purpose.

There must be a point to Roger Vickery’s story.  It is Kafkaesque in purpose but without the bond that cements her peculiarities.  If there was a purpose, I didn’t get it.  Not in this carnation. 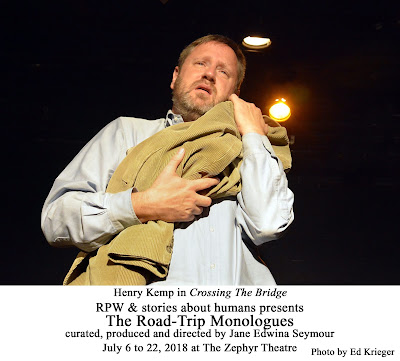 Crossing the Bridge by James Balian

Henry Kemp (actor) was a father with a young son who has suddenly become ill and a decision is made to put him into the car and rush him to the hospital when his temperature spikes to 108 degrees (not sure if that was a slip by actor Kemp – 108 degrees is usually fatal.). The conflict is one of a race against time. He is driving over a bridge during rush hour with his child in the back seat as son’s life hangs in the balance.  Kemp does a fine job and manages to live the monologue throughout.  There is more work to be done in character but it is a fine job nonetheless.

James Balian writes descriptively, the story moves seamlessly, and the visuals play upon deep emotions that all parents go through when their child is burning up with a fever. This was the most enjoyable scene with a very loving ending. 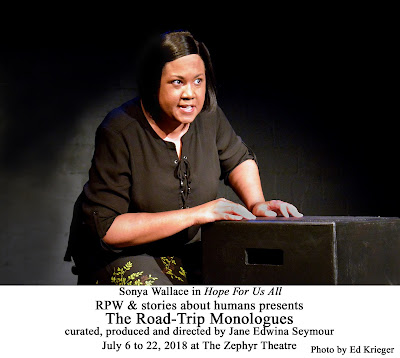 Hope for Us All by Doe Andersen-Bloomfield

Sonya Wallace (Shanqua) has a two-hour wait for a train.  She meets Amorose (not on stage), a bartender in the train station.  Shanqua and Amorose strike up a conversation when a nearby person is seen on television having a racist diatribe against African Americans. Shanqua is meek when confronting the man while Amorose is not and Shanqua must stand for what she believes.

Doe Andersen-Bloomfield fills in the empty space with differing lives, a bar, and wonderful relationships of real people who inhabit this world. The title is Hope for Us All but one did not really see how the character reaches that point.

Run! And take someone you would like to take across the country.