Why would anyone woman marry a man named Absorbine and then call their kid Absorbine, Jr., (Walmart $10.99)?  Well, Dixie Longate (Kris Andersson) did just that.

Down South LLC, in association with Louise Hall Beard and Joe Everett Michaels, presents Dixie Longate in Dixie’s Tupperware Party by Kris Andersson and directed by Patrick Richwood at the Kirk Douglas Theatre in Culver City through December 30, 2018.

Absorbine is now dead along with her other two husbands, due to no fault of Dixie. (But, thinking about it, is she entirely faultless?)

As my Georgian grandpa use to say: “Well, sometimes people just ain’t no count.”

After the death of Absorbine, the husband, Dixie had to do something besides drinking, her one guilty pleasure in life, and it was something that was getting her nowhere, fast.

She had three kids to raise (one with each husband). After attending her first Tupperware party, she was hooked. Not in the drugged or fishing kind of hooked, she just gravitated to a life that set a fire under her, that gave her some gumption within her loins.

So Dixie, gussied up in a ‘50’s housewife motif, bouffant red hair, blue eye shadow, luscious red lips, and earrings down to her clavicles, she was ready to put on her very own Tupperware party in voluminous grandeur. 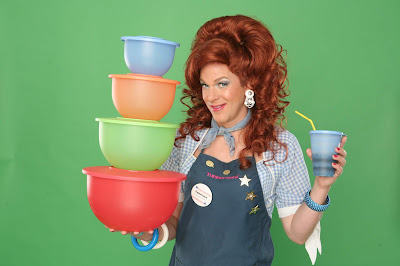 Not to spread rumors because that’s not me, but, Dixie hasn’t entirely given up drinking. During this Tupperware party, she takes a sip here and there, one sip to take the edge off, and the next sip she was off sashaying into a dancing motif slapping her backside. After all, it ain't a party until Dixie's up on the table doing something.

She is especially driven to drink while watching a man, Orion (who appeared to have never set foot into a kitchen), open a can of soup. Though from a man’s perspective, I believe that Dixie’s directions were not that clear, possibly because of the drink, or the inability of a man ever understanding the sincere directions of a woman.

Oh, and let’s not forget about the lesbians.

Dixie’s Tupperware Party is too much fun! You live the experience if you are of the mindset that you are there to buy Tupperware and listen to the presentation (catalogue provided).  It just flows to incredible heights.

Not all of it is a wacky comedy; there are moments that ring a solid truth, truths about abuse and pain that shakes the house into a buying frenzy.  It is sincere but probably part of the plan.

Dixie’s song is one of resilience, of a woman who has overcome many troubled periods to provide for her family and succeed at every level.  Still, she can’t shake the past and she brings that life with her to sell the heck out of those bowls, that are multicolored, last forever, and can be willed to many future generations

And it is probably why Dixie’s Tupperware Party has been running for eight or more years all across the country.

Kris Andersson (Dixie) is quick witted and the night is filled with glorious improvisational moments. So fast, one just lets things go because the next interesting thing quickly comes along. The jokes are a little blue and has this audience member saying, she said what?

Speaking of saying things, Christopher K. Bond’s Sound Design was a little off as the sound was not as clear as other productions witnessed at the Kirk Douglas.

Patrick Richwood, Director, leaves a lot of room for improvisation.  What is not clear is the progression of events, of Dixie getting more intoxicated as the night wears on, of a changing of character so profound that participants should be rushing the stage to buy the product. (Figuratively, of course.)

The night is filled with all sorts of goodies in a poke.  There is also a nice tribute to Brownie Wise the woman who started it all and who got women all across the country hosting, meeting, and getting to know their neighbors

After the show, Kris Andersson marches into the lobby of the Kirk Douglas for a meet and greet, and there’s nothing wrong with that. In fact it has a lot of southern charm.

Other members of this delightful crew are as follows:

Run! Run! And take your second cousin twice removed, the one who lives in a trailer park, not far from the creek.   You’ll both get a kick out of this.