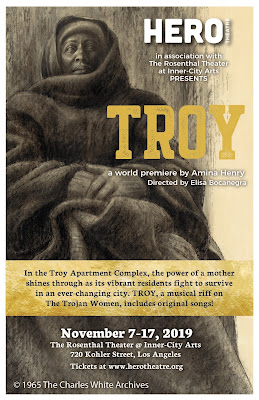 Prior to the performance, an actor left midstream in the rehearsal process, and there wasn’t enough time for the replacement to learn her lines.  The night was the culmination of an unfortunate event, which happens for a myriad of reasons.

But, without notice, something peculiar happened.

For the actor onstage now, uncertainties in the beginning were noticeable. A misplaced word, or a stutter became clear sign of lost or forgotten lines.

And, without notice, and after the first scene, the character brought her pages onto the stage.  For a moment, I turned from that character, thinking the worst without thinking about the cause and thus turned my attention to the reactions of the other characters briefly and then paused noting…

The peculiar part was an awakening – the play is about a woman slipping further and deeper into homelessness. In real life, I caught myself avoiding the actor’s craft, a turn away from one reality from someone in trouble who is trying to make the best of a unfortunate situation just as I have found myself turning away from homeless encampments.

These are sad times and not the time to be turning our heads. – Narrator

The Troy apartment building is a place of infinite suffering.  The current occupants are women with children who have long since lost their partners. Without an additional income they slip precipitously in a crevasse of unsustainability.

Andie (Mildred Marie Langford) sits outside, away from her sleeping child, folding laundry, to gather a sliver of sun between apartment buildings, bathed in the street sounds of a busy Los Angeles neighborhood, as Holly (April Nixon) steps outside her apartment to light a cigarette.

Age and life circumstances are getting the better of Holly but she takes solace in the beautiful flowers outside her apartment door.

“You can learn a lot from flowers.” – Holly

Holly notes that dressing nice and talking nice are important values for her.  Being pretty makes her feel like a queen.

Andie listening appears to have little room to be involved with anyone other than her immediate family.

But, that doesn’t stop Holly from telling her life’s stories, her twelve children most of whom are dead, and a son Johnny who she believes is going to help her, no save her.
Cassie (Carene Rose Mekertichyan), 17 years old, is Holly’s older daughter. Cassie wonders when they are going to get the car fixed so she doesn’t have to take the bus.

Holly’s other daughter Polly (Larrieux Ross) concentration lies in her books.   Polly is a remarkable student - getting “straight A’s” - and she dreams of becoming a Supreme Court Justice.

Tal (Adam Mendez, Jr.) the mailman shows up and the one thing that is immediately obvious is that he has a soft spot in his heart for Andie. Despite having a steady job and benefits Andie wants little to do with him. His way to convince her is to write letters to find a way into her heart and he does this repeatedly.

Dell (Jack Landrón) is the landlord and he is only there for one thing, the rent. Holly hasn’t paid in a while and Dell is threatening to throw her out if she doesn’t come up with the money.

Holly has a job, a hairdresser, but things have been a little slow at the shop.  She promises to pay and doesn’t worry about too many oppressive obstacles in her path.  She watches over her kids with little oversight and dreams about Johnny who is going to save her from this poverty and misery.  Because “things have a way of working out.”

While Cassie dreams about eating “pancakes with real maple syrup,” she sets her sights on Manny (DeForrest Taylor) a drug dealer and possibly a human trafficker who lives upstairs in their apartment building.

There is much to enjoy in Amina Henry’s play.  The language is raw and believable. The resemblance to The Trojan Woman by Euripides is poverty.  “Our country, our conquered country, perishes.” is symbolic of todays times of a few conquering the lives of many, keeping them in poverty and controlling their lives. And that is what we are seeing. Poverty and hunger is the greatest killer of most dreams. The characters dream of what they want but have little ideas on how to get there. Perhaps hunger conquers their dreams. Also, pride gets in the way of accepting help from the other characters as Holly and Andie all but dismiss those opportunities. And while most moments in the play works, the letter from the mailman near the end does not work.

The songs in this production are cute by T.J. Keanu Tario, composer, but offer little in the way of progressing the story. I Am a Mailman and Where’s My Money are endearing but does not move the play along or effect character changes on stage. We get emotional insight and feelings from the other songs, and the characters all sung the songs beautifully.

Elisa Bocanegra, director and Hero Theatre’s Artistic Director does effectively well despite the challenges of the play, the music, and other unexpected events.  It is a well diverse cast and a few of the actors have limited stage performances under their belts. That said some actors need a little more guidance. Polly needs another physical characteristic (perhaps ADHD), which will add to the unexpected event late in the play. The mailman needs to delivery mail besides his own and the landlord needs to take care of the property without only asking for the rent. The characters all have lives and traits inclusive of their objectives and we need to see that in their lives on stage.

There is something special in the way April Nixon (Holly) carries herself on stage.  It is both appealing and the definition of art. She dreams of the day her son will come to save her, her knight in shinning armor. Holly has a strong constitution and maybe that is her fault. She doesn’t accept help when offered because she doesn’t want to be beholden to anyone or entangled from the sources of that money. For Nixon, there is more room to fight for what she wants even if it means staying off of the streets. And for God’s sake Holly take the money and then give it back.

Mildred Marie Langford is Andie and plays the character pretty straight. Andie says she has a boyfriend but he is never around.  Andie shows us that she is not interested in the mailman but doesn’t show us the why she is not interested. Is the issue race? Is it that she wants the mailman to try twice as hard?  What is in her background that keeps her from saying no? Is there a way to give a hint that she might be interested? Why does she wait?

Carene Rose Mekertichyan as Cassie has a strong speaking voice.  It blows everyone else off the stage.  Perhaps there is a middle ground for a smaller venue rather than a voice for the Pantages. That aside, Mekertichyan does well in the role.  Carrie is a person who dreams bigger but is satisfied with “pancakes with real maple syrup.” Perhaps she should set her sights higher.   Cassie needs focus in her life.  She is a character who doesn’t acknowledge the mistakes she has made, even in the end when the only thing she can offer her mother is money.

Larrieux Ross is Polly a young lady who moves in the direction of her schoolbooks to get what she wants. She studies all day long and goes to the library. But, what is her conflict? She is interrupted by hunger (mentally and physically) and must find a way to get beyond that to absorb her books. Also, her mother and her sister are constantly getting into fights and that bothers her as well. Finding a stronger and creative objective is the key for this character.

Jack Landrón handles the role of Del effectively. Dell wants his money and is not playing any games.  It’s money or out you go into the street.

Adam Mendez, Jr. plays Tal a mailman who only wants his love requited.  Unfortunately, his counterpart wants nothing to do with him.  Mendez has a playful demeanor on stage and it works most of the time but one got the impression that he was looking out beyond the fourth wall, searching for approval, rather than working with the other actors in the scene.  Tal has to convince Andie that he is her only choice.  He went to college, but more importantly he has benefits and that should be the kicker. But, what is the conflict? And, how does that play out in action on the stage. She wants nothing to do with him, so he has to write letters to get through.  But when he delivers mail, his action should be to find out if he’s connecting first, and deliver the mail second.

Deforrest Taylor plays Manny, the upstairs drug dealer.  There must be another way to play this character. Slightly soft spoken with very little actions on stage.  This would probably work for television, but theatre is another matter. His interactions with Carrie don’t go far enough.  The words are there the physical play is not.  The same holds true with the landlord and the mother. Manny should find a way to put the money in Holly’s pocket, and this must be done physically. For the sake of adding an emotional life to the character, what if Manny was her son? How would that play? Or, what if, Manny was her lover?  What if Manny didn’t have a mother?  How would Manny play those scenes?

Ryan Hardge was the male understudy but did not perform on the night I attended.

Hero Theatre at The Rosenthal Theater at Inner-City Arts is a great place to see theatre in Los Angeles. The crew is friendly and the atmosphere is terrific. Elisa Bocanegra made sure to invite busloads of homeless people to the event for a brief respite to the grind of their daily lives. And that is a wonderful and remarkable thing!